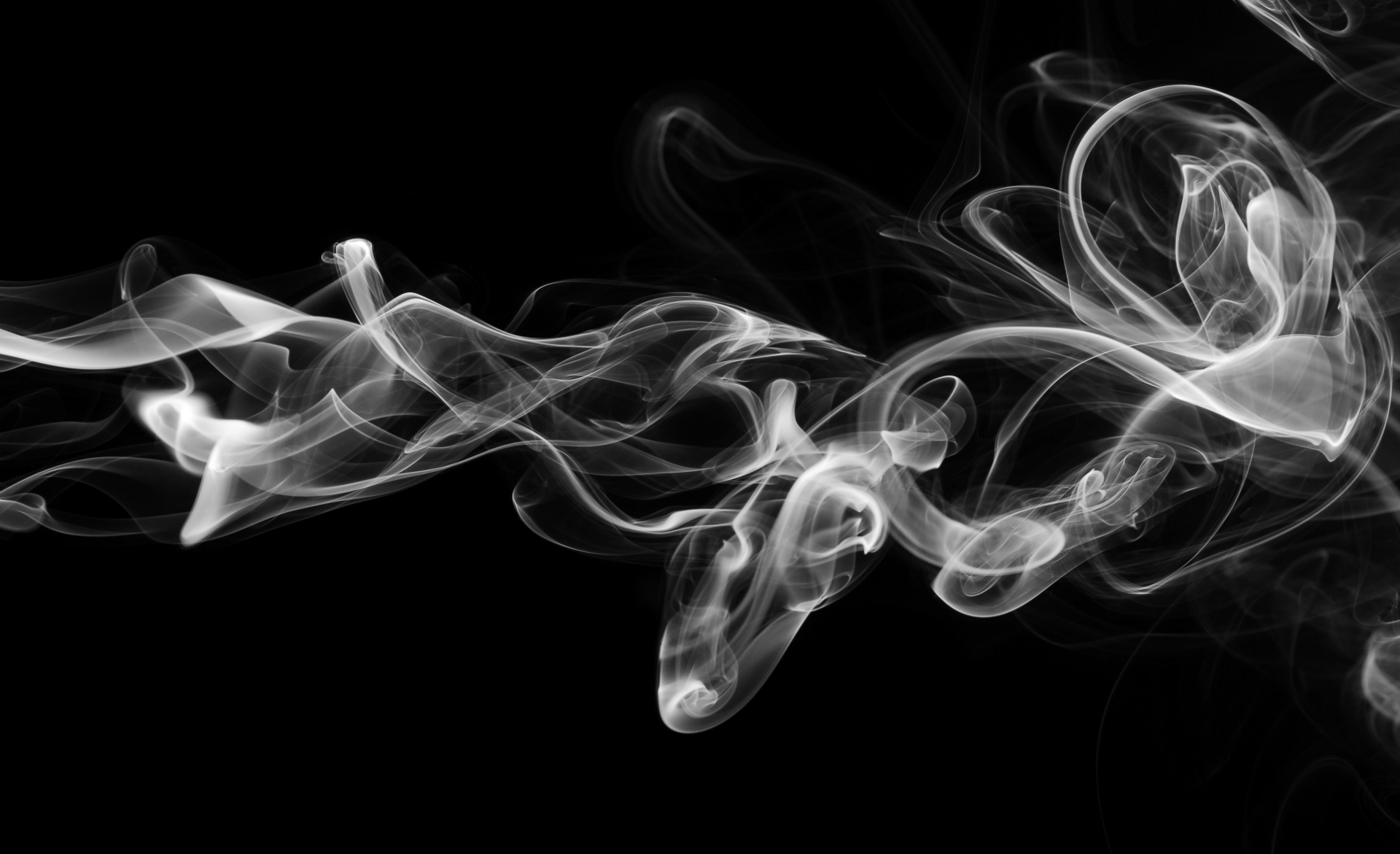 There is evidence that exposure to ETS increases the risk of breast cancer, nasal sinus cavity cancer, and nasopharyngeal cancer in adults, and of leukemia, lymphoma, and brain tumors in children.2

In Israel, smoking is banned in most closed public places including hospitals, schools and areas adjacent to them, trains and buses, restaurants, pubs, places of worship, and government buildings, as well as in some open public spaces such as playgrounds, zoos, swimming pools, railway station platforms, sports stadiums, and 75% of outdoor areas in pubs, restaurants, and wedding halls. Smoking is still permitted in designated areas in pubs, restaurants, and wedding halls, and there are special smoking rooms in the Knesset. The prohibitions on smoking in public places also apply to new tobacco products, such as electronic cigarettes and heat-not-burn tobacco products.

Despite extensive legislation to prevent exposure of the non-smoking population to ETS, surveys and studies show that over 50% of the Israeli population (including non-smokers and children) is exposed to ETS.3

The Environmental Health in Israel 2017 report defined challenges related to Environmental Tobacco Smoke. Progress in meeting them during the past three years is outlined below.

In 2018–2019, staff at the Ministry of Health’s public health laboratory implemented an analytical method for measuring urinary cotinine levels. The method was validated in an international quality assessment program and is being used in biomonitoring studies in Israel.

In the National Health and Nutrition Survey (Rav-MABAT) in 2015–2016, urine samples were collected from 103 Jewish and Arab children aged 6–11, and urinary cotinine levels were measured to detect ETS exposure in the twenty-four hours prior to the sampling.4, 5 Cotinine was detected in 59% of the children’s urine samples, indicating exposure to ETS. This contrasts with parents’ self-report, according to which fewer than 40% of the children were exposed to ETS. Among the children sampled, cotinine levels among those exposed to ETS at home exceeded cotinine levels of the others. Cotinine levels were higher in children of low socioeconomic status in both the Jewish and Arab populations.

In an international comparison of average cotinine levels, the findings among Israeli children exceeded those among children in Canada, Germany, England and Cyprus (Figure 1).5

In the same survey, cotinine levels were measured in urine samples of 200 adults.3, 7 Focusing on a sub-population of 133 non-smokers, urinary cotinine was detected in about 60% of the samples, indicating exposure to ETS. Both the scope and the level of exposure to ETS in non-smokers were unchanged relative to the findings of a similar study in Israel in 2011. Average cotinine levels in non-smoking adults were higher among the Arab population than among the Jewish population. Furthermore, the percentage of non-smoking Arabs who reported being exposed to ETS at home was higher than the percentage of non-smoking Jews who reported such exposure. 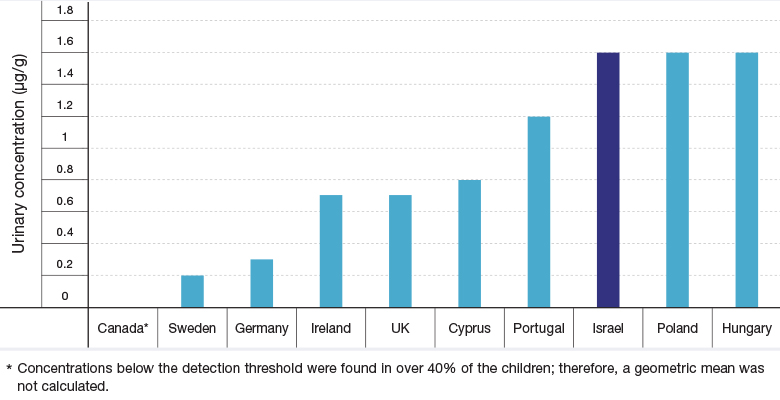 In a study conducted at the Hebrew University-Hadassah Braun School of Public Health and Community Medicine in collaboration with Ministry of Health (MoH) researchers, cotinine levels were measured in urine samples collected from 265 pregnant non-smoking women and ninety-seven newborns. Cotinine was detected in the urine of about 40% of the women and 29% of the newborns. No association was found between the women’s cotinine levels and those of the newborns. (Notably, the urine samples were collected from the women during their pregnancy and from the newborns—soon after their birth.) Higher cotinine levels were found among women whose husbands smoked. The researchers found an inverse correlation between cotinine levels in newborns and their birth weight and head circumference. That is, newborns who had been exposed to ETS during their mother’s pregnancy were born with smaller head circumference and lower body weight than those of newborns not exposed to ETS.8

A 2016 amendment to the Prevention of Smoking in Public Places and Exposure to Smoking Law completely banned smoking in schools, schoolyards, and anywhere within ten meters of a school entrance. In April 2018, the Director General of the Ministry of Education issued a circular regarding the implementation of the law and the enforcement policy concerning pupils and staff in the education system. The Ministry began to monitor enforcement in 360 elementary schools and anti-smoking curricular materials were updated and developed for different age groups—primary, junior-high, and senior-high.

An MoH study that examined asthma hospitalization rates in children (aged 0–14) between 1996–2015, analyzed by regions, found a significant downward trend in rates over the years.9 A joint study by MoH and Clalit Health Services is examining trends in asthma incidence and prevalence among children aged 2–18 between 1998–2015.

In 2018, new regulations expanded the ban on smoking in public places to open areas where over fifty people gather and to playgrounds, zoos, and parking garages. The injunction against smoking in public places was also extended to electronic cigarettes. Despite the expansion of anti-smoking regulations and various initiatives by local governments and the Israel Defense Forces (IDF), enforcement at the municipal level is insufficient and encounters a range of obstacles.

In 2018, municipal inspectors issued over 6,000 fines for violating the Prevention of Smoking in Public Places and Exposure to Smoking Law, mostly for smoking in restaurants and in hospitals (Figure 2).10 In many cities (Eilat, Haifa, Tur’an, Kefar Sava, Mevaseret Zion, Ma’ale Adumim, Nes Ziona, Acre, Afula, and Ramle), municipal inspectors were trained to enforce the law but few of those trained actually engage in enforcement.

Figure 2: Number of Fines for Violating the Prevention of Smoking in Public Places and Exposure to Smoking Law, by Place of Violation, 2018
Source: Israel Ministry of Health10 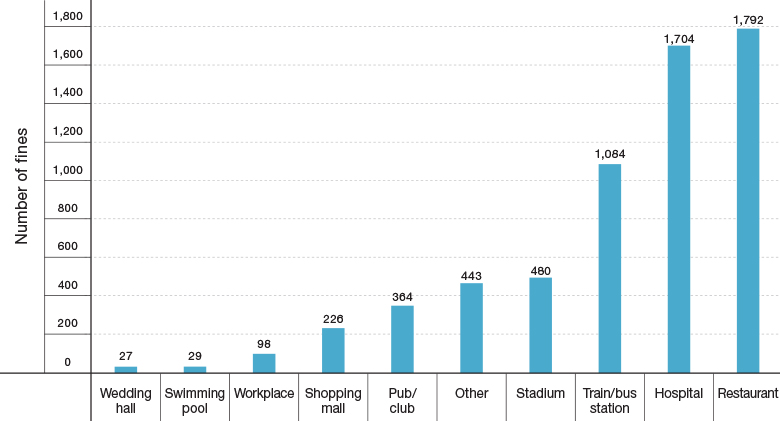 In 2017, the IDF launched an intervention program aimed at reducing smoking and ETS exposure in the army. The program includes revisions of army policies and regulations, efforts to raise awareness of the harmful effects of smoking and to help soldiers quit smoking, and a gradual ban on selling smoking products on IDF bases. It was first applied on open bases and is gradually being expanded to other bases countrywide.

Research on Exposure to Environmental Tobacco Smoke in Israel

Several countries have adopted new policies that further restrict smoking in order to reduce exposure of non-smokers to ETS:

In addition to bolstering enforcement and raising the general population’s awareness of the hazards of smoking and ETS exposure, the focus should be on high-risk populations—including the Arab population, low socioeconomic status groups, pregnant women, and people with mental illness living in hostels in the community.

(9) Israel Ministry of Health (2018). Regional disparities and trends in hospitalization for asthma in children, 1996–2015 (Hebrew). https://www.health.gov.il/NewsAndEvents/SpokemanMesseges/Documents/13122018.pdf (retrieved May 2020).