Rapid development, industrialization, urbanization and the resulting increase in pollution and population density affect public health in a number of ways. There is evidence that living near industrial areas and major roads increases exposure to air pollution and noise, and increases the risk of morbidity and early mortality. Recent studies show that living in proximity to green spaces contributes to mental health and healthy birth outcomes, reduces cardiovascular morbidity, and lowers the rate of early mortality.

Health- oriented planning of open public spaces and their microclimates is essential for reducing exposure to ultraviolent (UV) radiation and for promoting an active lifestyle. Transportation planning, in particular the proper design of public transportation networks, can have a significant effect on public health by promoting cycling and walking, and reducing exposure to air pollution. Energy resource planning has a potential impact on public health, particularly in a densely populated country such as Israel, where energy production still relies primarily on fossil fuels (in 2016, 36% of energy from power plants was based on imported coal).

Israel is a small country (20,000 km2) and most of its territory is unavailable for development (e.g., because of extensive military training zones). Israel is one of the most densely populated countries in the world (with an average of 394 people per km2); the highest population density is in the center of the country (Figure 1). 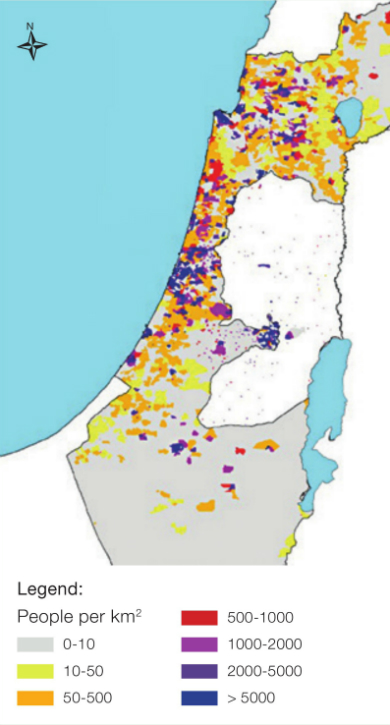 The Israel Planning Authority (IPA) is a hierarchical governmental body that promotes, regulates, and administers plans for the development of land for housing, infrastructure, industry, and the use of natural resources. The IPA’s divisions and district planning bureaus supervise and guide the national, district, and local planning committees, which are composed of various public and government representatives. National development outline plans are generally determined by the National Council for Planning and Construction, in accordance with the 1965 Planning and Construction Law. Specialized planning issues are addressed by dedicated committees, such as the Infrastructure Planning Committee (VATAL) or the Subcommittee for Principle Planning Issues (VALNATA) (Figure 2).

In 2015, ministerial responsibility for the IPA was transferred from the Ministry of Interior to the Ministry of Finance (MoF). The MoF coordinates the National Planning Council in collaboration with representatives from several government ministries and representatives of the public. This structural change was preceded by legislation in 2014 designed to promote rapid housing development (the Law on Promoting Construction in Preferred Areas for Housing).

It should be noted that the Ministry of Health (MoH) received the status of a substitute member in the Committee for Planning and Construction of Preferred Areas for Housing (VATMAL), which was formed under this law. As such, the MoH representative does not have the power to vote on plans in preferred areas for housing, except when filling in for a representative of the Ministry of Agriculture and Rural Development (MoAg). In addition, new national guidelines for zoning were developed independently by “The Housing Cabinet,” a temporary body that does not include the MoH or other health representatives. 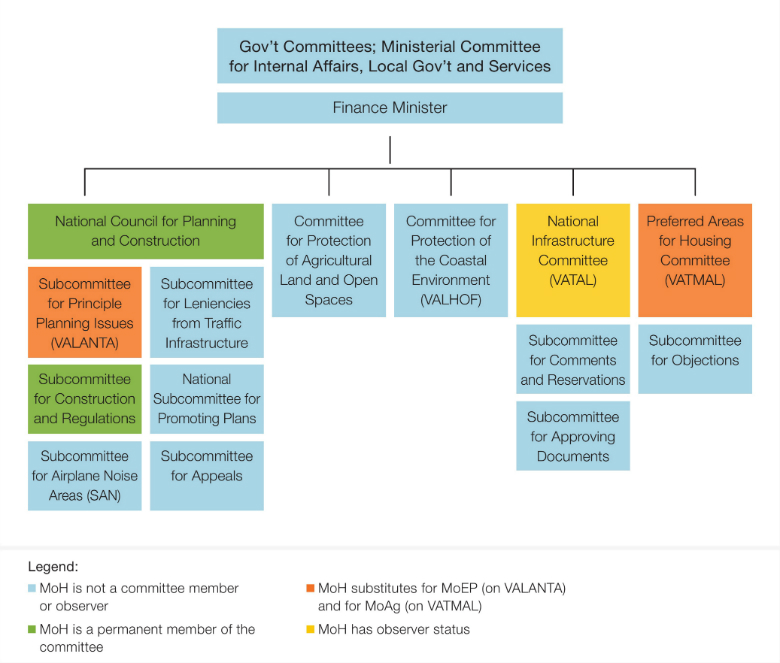 The 1982 Building and Construction Law and Ministry of Environmental Protection (MoEP) regulations from 2003 require an Environmental Impact Assessment (EIA) for plans expected to significantly impact the environment - for example, plans for power plants, airports, sea ports, mining, and industrial development. The EIA is a comprehensive report on the estimated environmental effects of development projects. If the anticipated environmental effects are unacceptable, design measures or other relevant mitigation measures should be taken to reduce or prevent those effects. After the EIA is conducted, the MoEP provides recommendations for the project. The MoEP’s EIA regulations do not explicitly require the assessment of the health implications of planning initiatives, but they do require the assessment of several health related issues, such as air pollution and exposure to hazardous materials. In 2015, several Knesset members tried to promote legislation requiring that planning processes include a Health Impact Assessment (HIA) - a broad assessment of the health impact of policies, plans and projects. There is still no progress on this subject.

In 2011, the MoH gave the IPA draft guidelines for conducting a Health Risk Assessment (HRA) - a quantitative assessment of risk from chemicals or air pollution; however, the guidelines were not implemented. Regardless of the legal status of these guidelines, representatives of the MoH, public committees or parliamentary committees ask for an HRA and recommendations in selected cases (Table 1). One significant example is Sde Barir, an area near Arad and Kseife where a new phosphate mine is planned. In 2014, an assessment of the health impact of this planning initiative was performed by an international expert. According to the assessment, an expected increase in PM2.5 could result in a significant increase in the associated burden of morbidity and mortality in the population living adjacent to the proposed mine. Based on this finding, the MoH recommended considering halting or significantly restricting mining plans due to their proximity to residential areas. It is important to note that no final decision has been made to date regarding phosphate mining in Sde Barir. 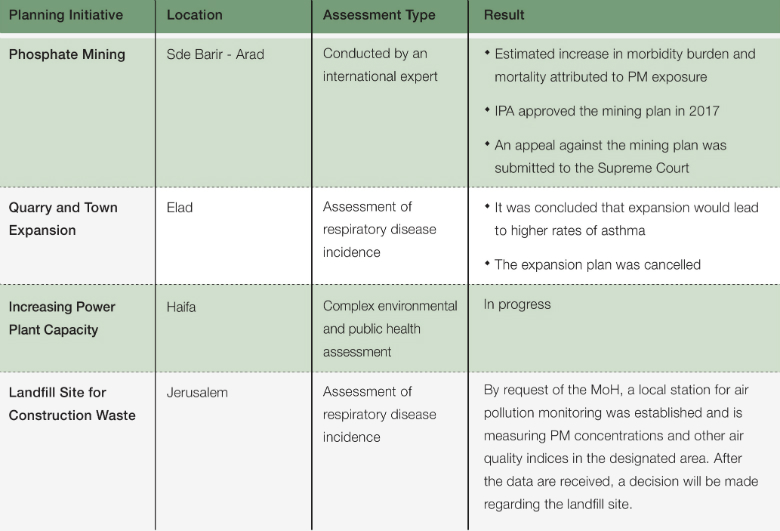 In 2015, the MoEP published the Guide to Environmental Planning, which addresses major topics in the field of health and environment, including air pollution, noise, radiation, recycling, green building, and climate-based planning. The document specifies the planning steps required to build new roads, including mapping the current populations and ongoing needs, examining environmental aspects such as national parks, open spaces, ecological corridors, and light pollution, and examining planning alternatives(3). In 2013, the MoEP and Ministry of Education (MoEd) published draft guidelines for planning considerations regarding siting of schools in proximity to agricultural areas.

In recent years, numerous regulatory changes were implemented to allow denser housing development, most of which were conducted without an HIA. Two changes have potentially adverse public health effects:

According to a decision by the National Planning and Building Council, the minimum distance between gas stations and residential areas was reduced from 40 to 20 meters.

The planning guidelines for open public space per person was reduced from 25 m2 to 5-10 m2 and now includes street corners, wider sidewalks, and nature reserves adjacent to the city as part of the open public spaces. Similar changes were already made in designated open spaces within the domain of schools and day care facilities(7).

There are guidelines for shading playgrounds in kindergartens (25% of the area, according to the Ministry of Economy and Industry standard), schools (15% of the schoolyard, according to joint guidelines by the MoEd and MoH), and swimming pools (25% of the pool area). However, there are no regulations or binding guidelines for shading areas at the street level and in open public spaces, including in public playgrounds. The IPA is currently participating in efforts to draft shading guidelines, in collaboration with the MoH, the MoAg, and several municipalities.

Members of the “Forum 15”, an umbrella body of 15 leading local authorities, have adopted the Green Building Standard for all local planning initiatives, including residential, commercial, and public buildings. The Green Building standard (Israeli Standard 5281) is a voluntary standard for sustainable construction and housing. The standard consists of a detailed rating system to evaluate a building plan for its sustainability, or “greenness,” in a wide range of areas, such as energy, soil, water, materials, waste, transportation, health, and welfare(4).

In 2015, the Israeli government submitted its greenhouse gas reduction targets to the secretariat of the UN Framework Convention on Climate Change (UNFCCC). Among the targets, Israel committed to an increase in renewable energy from the current rate of 2% to 17% of the total energy production by the year 2030.

Major efforts are underway in both solar and wind energy development, and in energy efficiency measures. The Ministry of Energy published a national plan for energy efficiency in 2016 for public review(5). Nonetheless, there is still no legislation on renewable energy in Israel. The MoH and the MoEP published guidelines for buffers between residential areas and large wind turbines, as well as a requirement to conduct noise simulation.

Data on Planning Issues in Israel

During the years 2005-2017, soil contamination by petroleum, hazardous materials, and waste was identified in an increasing number of sites. The MoEP ordered a survey to estimate the scope of contaminated land and the cost of remediation. The survey identified 700 sites with proven land contamination and an additional 23,100 sites with suspected past or present contamination. The majority of contaminated sites previously served as petroleum refinement and storage areas, gas stations, army bases, or defense industry sites. The estimated remediation cost was NIS 8.8 billion, with 20% of this cost targeting the contamination of soil used for petroleum storage and treatment. To date, there is no comprehensive legislation in Israel requiring an EIA and remediation before approval of construction on contaminated lands(9).

According to a survey conducted in 2014 by the Central Bureau of Statistics, 56% of Israelis are satisfied with the amount of green space such as parks in their residential areas. However, only 27% of the Jewish residents of Jerusalem and less than half of the residents in the Northern District were satisfied(2).

Another critical problem is the expansion of existing neighborhoods and urban renewal projects without effective public transportation planning. In 2014, and again in 2016, an NGO (Adam Teva V’din - the Israel Union for Environmental Defense) and several Knesset members attempted to pass a bill requiring assessment and planning of public transportation prior to embarking on housing planning initiatives. This and several other bills addressing public transportation did not pass, mainly due to increasing pressure to reduce the cost of housing development.

Although the annual budget of the Ministry of Transportation (MoT) for bicycle paths is only NIS 19 million (which enables paving only 4 km), there is increasing awareness regarding the need for planning and paving such paths, especially in big cities with high socioeconomic ranking. In 2017, the MoT announced a NIS 620 million master plan to construct an intercity bicycle path connecting cities in central Israel. A survey conducted by the “Forum 15” localities in 2014-2015 showed that most of its member cities have master plans for paving bicycle paths. However, according to the survey, none of the cities has more than 50 km of paved bicycle paths except for Tel Aviv (which has 120 km of bike paths). Furthermore, the degree to which the paths are interconnected and serve as an effective means of transportation was not directly measured in the survey and thus riding paths in open spaces, outside the city, may artificially inflate the estimate.

Research on Health Aspects of Planning in Israel

Planning processes require a complex balance between the expansion of residential areas and industrial zones, and the preservation of open spaces. Israeli regulation of land usage, planning, and development is governed by several bodies that represent competing public interests, and consequently, environmental health issues are often compromised. During the past decade, public protest over rising housing prices has pushed governments to ease regulatory constraints on construction and development. As a result of these changes in the planning landscape, the MoH faces considerable challenges in introducing environmental health considerations into national and local planning processes. Some progress has been made in mandating HRAs for existing environmental health issues and requiring HIAs in future planning policies.

Planning in Israel entails a number of health-related challenges:

(2) Israel Central Bureau of Statistics (CBS) (2016). A new collection of data from the 2014 Social Survey: Visits of Israelis to open spaces and attitudes about their preservation (Hebrew). http://www.cbs.gov.il/reader/newhodaot/hodaa_template.html?hodaa=201619018 (retrieved November 2017).