Indoor air quality (IAQ) refers to air quality inside closed environments such as buildings and their surroundings—private homes, offices, public buildings (for example, schools and hospitals), and mass transport systems. Poor IAQ may adversely affect the health of individuals who live or work in or around a building. Exposure to indoor air pollution creates a health risk because the majority of people in developed countries spend most of their time indoors and in enclosed spaces.

Indoor air pollutants include various types of chemicals: toxic gases such as carbon dioxide (CO2) and radon, volatile organic compounds (VOCs) such as benzene and formaldehyde, respirable particles, combustion products, pesticides, tobacco smoke, and microbial biological pollutants, among which are hundreds of strains of bacteria and fungi that thrive indoors in sufficiently damp conditions.1

Four factors affect IAQ: (a) indoor sources of pollutants including indoor biofuel for cooking and heating, materials used in construction and furniture, and products that emit VOCs; (b) the quality of ambient air entering the closed environment; (c) the rate of air exchange between the indoor environment and the outdoor environment; and (d) ventilation systems, which themselves often contain pollutants.

Spending time in a closed building with poor IAQ may result in adverse short-term health outcomes such as upper and lower respiratory tract infections, allergic reactions, irritation of the eyes, nose and throat, headaches, dizziness, and even cognitive impairment.2 In addition, most exposure to polluted ambient air occurs when ambient air penetrates the indoor space. This may result in adverse long-term health outcomes such as respiratory diseases (asthma, chronic obstructive pulmonary disease [COPD], bronchitis), heart disease, cancer, and diabetes.3 Certain population groups, like the elderly and nursing home residents, are considered particularly sensitive to indoor air pollution due to their age or underlying health conditions and the long hours they spend indoors.

Although there is no overarching legislation on IAQ in Israel, there are standards and regulations pertaining to indoor air (radon, ventilation requirements), some specified in building and planning codes and standards.4 Government ministries primarily address IAQ indirectly, by dealing with ambient air and establishing committees that regulate consumer products and furniture. Green building committees exist as well.

Israel’s warm climate poses challenges, especially related to home ventilation. Apartment air conditioners are widely used amid rising local living standards and global warming. Thus, Israelis are transitioning from natural ventilation (by opening windows) to more extensive use of air conditioners, most of which recirculate air. Despite the country’s warm climate, fireplaces and other means of open fire heating with biogenic fuel are also used in Israel.

The Environmental Health in Israel 2017 report defined challenges related to Indoor Air Quality. Progress in tackling them in the past three years is outlined below.

Researchers at the Technion Center of Excellence in Exposure Science and Environmental Health (TCEEH) are studying VOC exposure in daycare centers in the Haifa Bay area, including research on the relationship between ambient air quality and IAQ. According to interim results, indoor concentrations of more than twenty VOCs exceeded the simultaneously measured outdoor concentrations of the same VOCs. The surfeit of VOC concentrations indoors is related to emissions from indoor sources and the slower breakdown of organic matter in a protected indoor environment than in an outdoor environment, caused, among other factors, by less photochemical decomposition and oxidation due to the lack of direct sunlight. The study also found a strong effect of the rate of air exchange on VOC concentrations in the daycares; namely, VOC concentrations were lower in centers that extensively used natural ventilation (including those located near roads) than in others. Importantly, however, this study focused only on VOCs and not on other contaminants, such as particulate matter (PM).

In recent years, several studies have been conducted on the relationship between ambient air and indoor air and the health effects of IAQ. In one study, researchers from the Hebrew University of Jerusalem found that indoor and outdoor PM concentrations (with diameters less than 2.5 µm and ranging from 2.5 to 10 µm) were similar in the same area. Figure 1 displays the ratio of indoor to outdoor particles (IOR): the higher the ratio, the more particles enter the building. The ratios shown are in the city of Elad (three locations), Kibbutz Einat, and Kibbutz Givat Haim Ichud.5 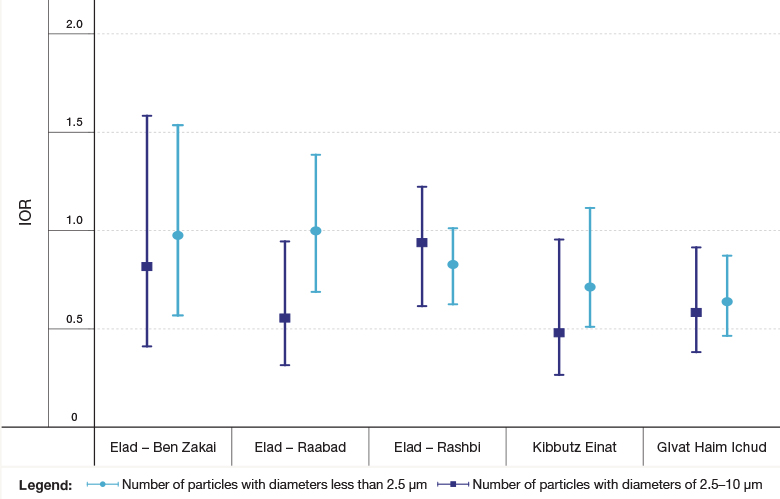 Other studies focus on the impact of smoking outside a pub on PM concentrations inside the pub, emission of VOCs from polyurethane mattresses under different sleeping conditions, and the effect of exposure to air pollution (indoor and outdoor) during pregnancy and early childhood on respiratory diseases.

The Ministry of Health (MoH) published a factsheet on indoor air pollutants, focusing on the types and sources of pollution. The document presents a series of recommendations for reducing exposure to these contaminants, such as refraining from smoking inside the home and from using wood-burning fireplaces, assuring ventilation, avoiding dampness, and spending less time in underground parking garages.6

In late 2019, the National Council for Planning and Construction formulated a recommendation for the Minister of Finance on standards to protect against dampness.7

To date, no central government authority has been established to address IAQ. Consequently, the topic receives neither priority nor funding. It is instructive to examine what other countries are doing: In the U.S., for example, a federal interagency committee on IAQ brings together representatives of various government agencies and departments, including the U.S. Environmental Protection Agency (U.S. EPA), the Department of Energy, the Occupational Safety and Health Administration (OSHA) and the Consumer Product Safety Commission (CPSC).8 In Germany, a national committee has been formed—the German Committee on Indoor Guide Values—to define values of indoor air pollutants.9 In South Korea, the government is instituting strict regulations on a wide range of indoor air contaminants.10

Although awareness of the harmful impact of indoor air pollution on public health has been growing in recent years, little progress has been made in tackling the challenges highlighted in the Environmental Health in Israel 2017 report. One reason for this is the lack of a central governmental authority or joint inter-ministerial task force to address the issue; another is lack of support for research in this field. Given the particular sensitivity of children to indoor and outdoor air pollution, it is essential to promote pilot studies on indoor air pollution in schools in Israel, expand the purview of such research, identify the sources of these contaminants in schools, and assess their impact on health. Such assessments may help shape relevant policy in Israel and formulation of guidelines for planning committees—for example, in choosing safe sites for schools in the context of main roads and other sources of pollution, such as agricultural fields and industrial plants.

Another challenge is to gain a better understanding of indoor air pollutants in Israel. For example: Are there sources of indoor air pollution that are unique to Israel? Which indoor micro-environments are more affected than others by air contaminants? How do the climatic conditions (wind, humidity, and temperature) in Israel affect the dispersion of contaminants inside high-rise buildings and the relationship between ambient air quality and IAQ?

Green building is gaining momentum in Israel and in the world, contributing to environmental quality and energy savings and thus contributing to public health as well. Israel’s current green building standards, however, do not include separate criteria for indoor air pollution. Furthermore, the principles of green building may sometimes have an adverse effect on IAQ. For example, the emphasis on sealing and energy conservation comes at the expense of ventilation of rooms. Therefore, it is important to address these aspects and to explicitly incorporate criteria on indoor air pollution into green building standards. The standard that relates to adequate ventilation in buildings with no central ventilation systems focuses on the size and location of openings (such as windows). In the current reality, however, with the widespread use of apartment air conditioners, this standard may not attain its objective and should be re-evaluated.