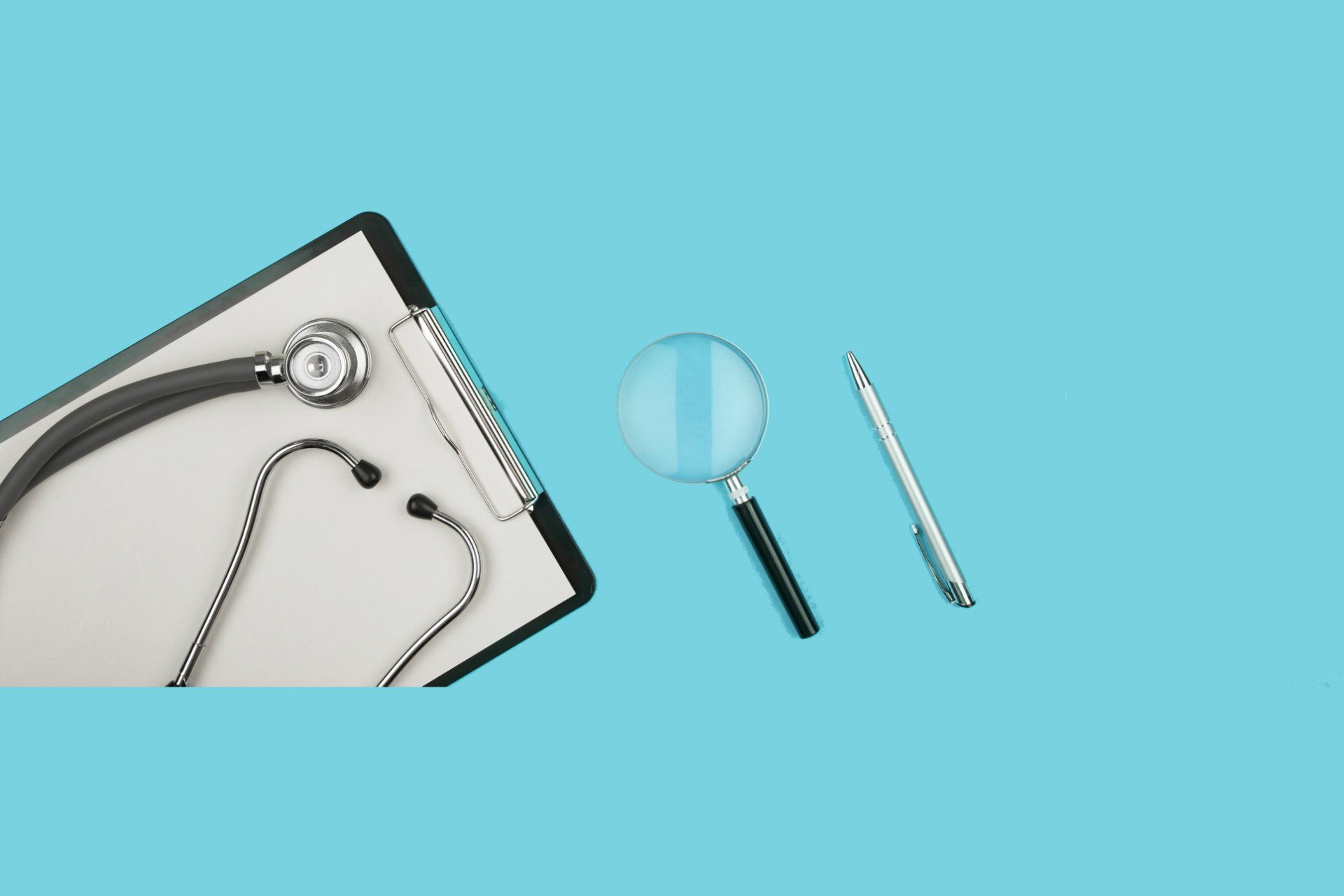 Many professional organizations—the World Health Organization (WHO), the U.S. Centers for Disease Control and Prevention (CDC), and the European Environment and Health Information System (ENHIS) in the WHO European Region, among others—have compiled lists of selected environmental health indicators. Several countries, including the U.S. and New Zealand, have created environmental health indicator programs that include databases available to the public and to decision-makers.1, 2 The program enables, for example, identification of populations at risk of developing diseases associated with environmental pollution, as well as trends in morbidity or in exposure to environmental pollution.

A wealth of environmental and health data are collected in Israel. Environmental data are collected and monitored continuously, periodically or in surveys of contaminants in the air, water, and food. The health data are collected in national databases and registries that allow tracking and monitoring of selected diseases (cancer, stroke, diabetes, kidney disease including dialysis and transplants, congenital anomalies, and infectious diseases). A perinatal registry records data on low birth weight (less than 1,500 grams) and on emergency room visits and hospitalizations. There are also data on the health status of adolescents (age seventeen) who are candidates for military service. Copious data are stored in the electronic databases of the country’s four HMOs. The National Program for Quality Indicators in Community Healthcare (QICH) publishes data on twenty-eight quality indicators including asthma rates, cancer screening, cardiovascular health, pediatric health, diabetes, and immunization among the elderly.3

Despite this wealth of data, however, Israel has no databases that combine environmental and health data to help identify possible causal associations. In addition, there are few published assessments in Israel of the burden of disease resulting from exposure to environmental pollution. Various global projects—the Global Burden of Disease (GBD), State of Global Air, Global Alliance on Health and Pollution, and the WHO/UNICEF Joint Monitoring Programme for Water Supply, Sanitation and Hygiene, among others—provide useful data that can support the planning and assessment of measures to reduce the burden of disease in Israel.

The Environmental Health in Israel 2017 report defined and categorized candidate indicators for environmental health in Israel on the basis of indicators developed by WHO, CDC, and ENHIS: exposure, chronic disease, and climate change indicators as well as those relating to early childhood. In recent years, data for numerous indicators—primarily related to exposure to lead in drinking water, children’s exposure to ETS, and adults’ exposure to organophosphate (OP) pesticides—have been synthesized and published. For other indicators, however, such as the prevalence of asthma and allergies in children, no data have been synthesized in recent years, partly due to the lack of regular and periodic collection and synthesis of data on environmental health indicators. Table 1 displays these indicators, the year when the relevant data for each indicator was last updated, and primary findings in recent years. 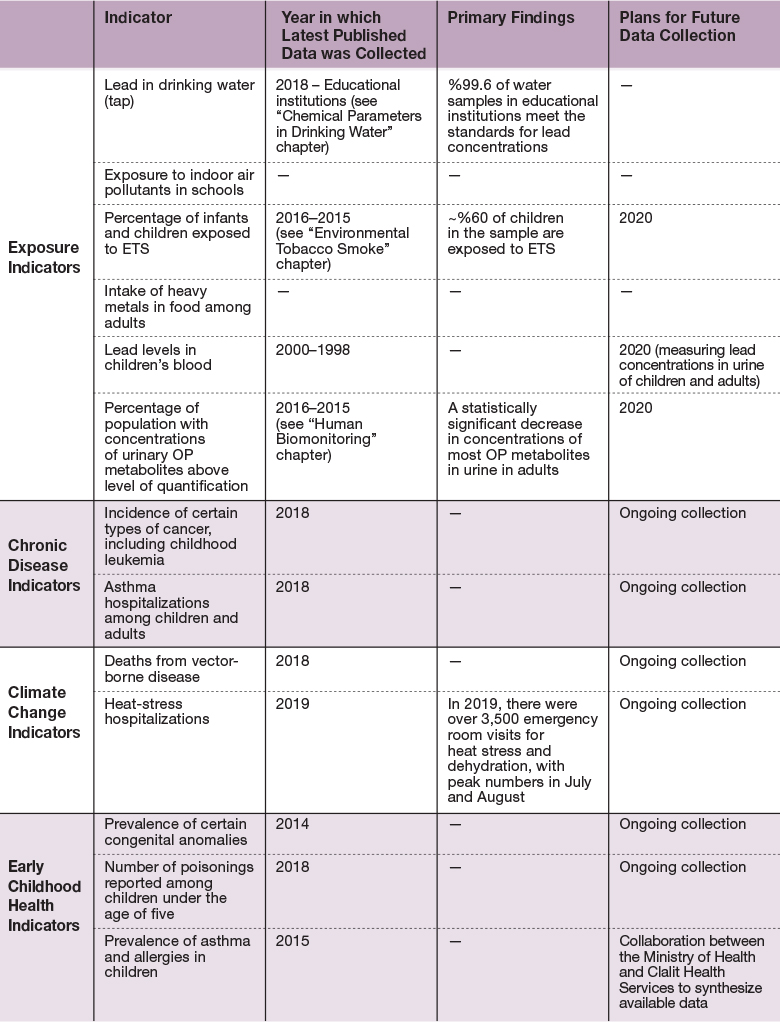 Data on Risk Factors and Trends

As noted, despite the importance of up-to-date and long-term data for examining environmental health indicators, no environmental health indicators program has been established in Israel. Such a program would be instrumental, for example, in integrating and managing data of relevance to all of the indicators in Table 1. Some data, however, are available on several exposure indicators, chronic disease indicators (cancer rates, asthma hospitalization), and vector-borne diseases, allowing for time trend analysis. In addition, the GBD project facilitates the study of principal risk factors for morbidity and mortality in various countries and of trends in the burden of morbidity and mortality. The GBD database provides information on chronic morbidity indicators, sanitation- and hygiene-related health risks, and vector-borne diseases in Israel. According to these data, exposure to particulate air pollution is one of the ten leading risk factors for mortality in Israel (Figure 1).4 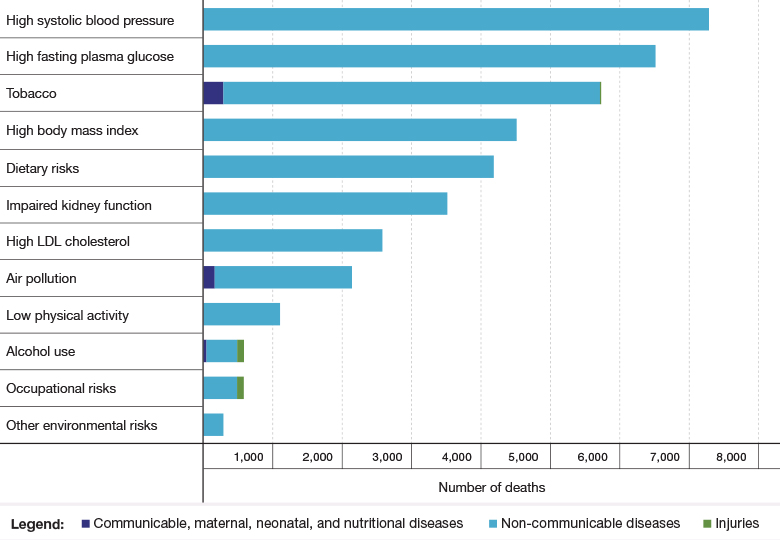 Exposure to Air Pollution in Israel

According to the GBD database, exposure to ETS is responsible for about 500 deaths in Israel every year and a loss of some 14,500 Disability-Adjusted Life Years (DALYs). As Figure 3 shows, part of the disease burden caused by ETS falls on children.4 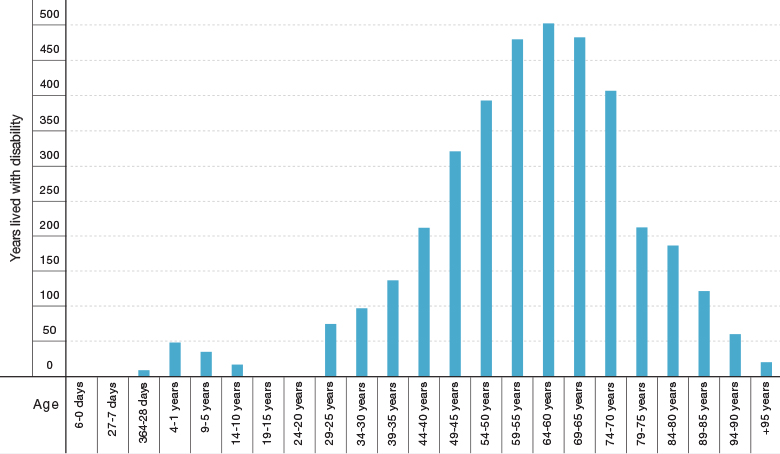 Exposure to a range of environmental factors inside or outside the home, including particulate matter, ozone, ETS, dust mites, mold and allergens can lead to development or aggravation of asthma.

Researchers from the University of Haifa and the Israel Defense Forces (IDF) studied the incidence of asthma in relation to place of residence among about 13,800 boys aged 16–19. The asthma rates found were 7.1% among the research population (with 3.8% suffering moderate-to-severe persistent illness), 8.76% in Tel Aviv, 6.96% in Haifa, and 6.09% in Hadera. The researchers concluded that exposure to industrial and traffic-related air pollution is associated with asthma prevalence.7 The disparity between the estimate reported in the study and the QICH findings apparently stems from differences in data collection methodology and in the type of asthma included in the estimate.

Researchers from Shaare Zedek Medical Center and the IDF, examining the incidence of asthma in people born in Israel in 1976–1990, found an increase in rates of mild persistent asthma among those born in 1976–1980 and a decrease in these rates among those born in 1980–1990. The incidence of moderate-to-severe asthma, however, was low among the 1976–1980 birth cohort and very high in the 1986–1990 group. The study also found an association between moderate-to-severe asthma and obesity in boys and girls, an association between underweight males and mild asthma, and a correlation between living in a rural environment and mild asthma.8

The cancer rate in Israel exceeds the world average but ranks last among fifty countries with the highest rates. According to MoH data, there was a decrease in the incidence of leukemia (in all groups) and mesothelioma (among men) in Israel between 1996 and 2017 (Figure 5).9 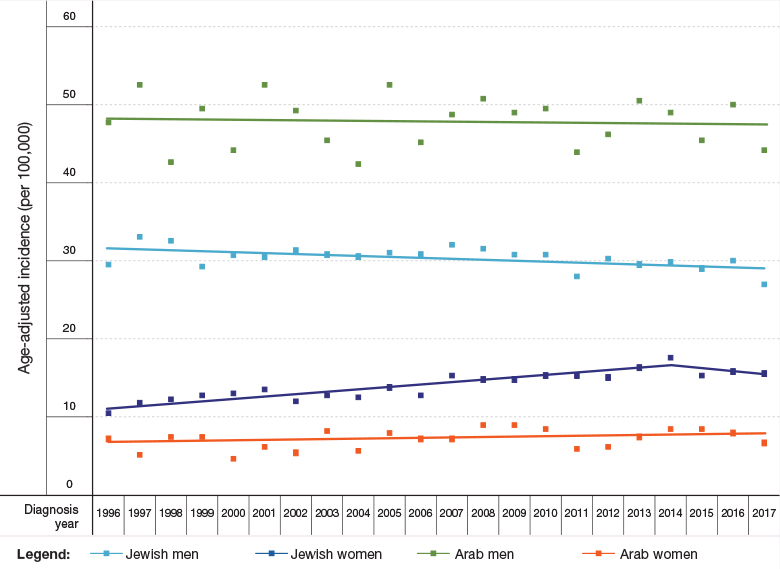 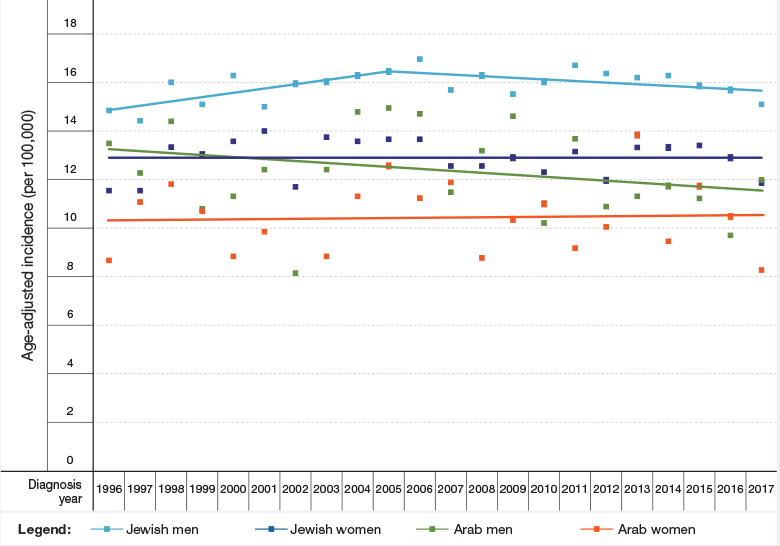 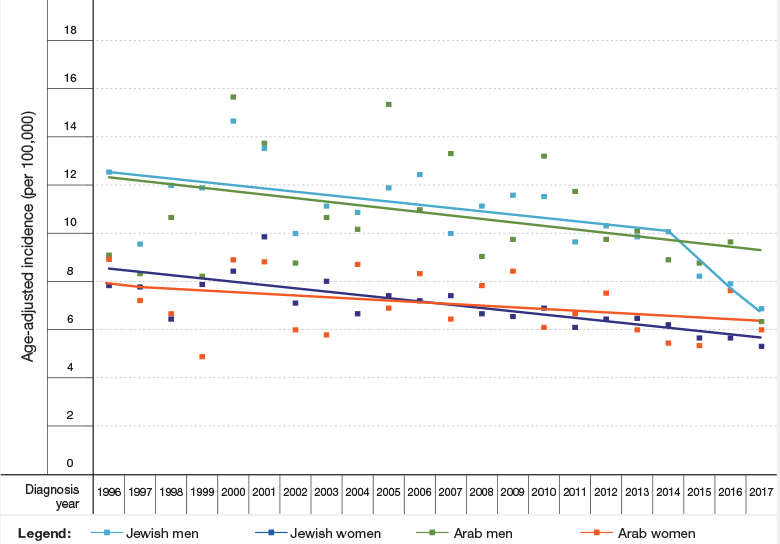 Exposure to air pollution (PM2.5) is a known risk factor for diabetes. In addition, exposure to EDCs is associated with Type 2 diabetes and pre-diabetic disturbances. For example, exposure to high levels of dioxins is associated with an increased risk of diabetes stemming from metabolic disturbances or altered glucose metabolism. There is evidence that the prevalence of autoimmune disorders, including Type 1 diabetes, is increasing around the world and that environmental factors may be implicated.

According to the aforementioned QICH report, the incidence of diabetes among children ages 2–17 was stable (0.1%) in 2014–2018.6 Morbidity and mortality resulting from Type 1 diabetes trended down in 1990–2017 in Israel and in other OECD countries. Morbidity and mortality from Type 2 diabetes increased in the OECD countries. In Israel, despite an increase in these rates prior to the year 2000, morbidity and mortality decreased in the following years (perhaps due to improved treatment). Still, it should be emphasized that the mortality rate per 100,000 from Type 2 diabetes in Israel surpasses the OECD average (Figures 6 and 7).4 Given that different countries follow different rules for coding diabetes as the cause of death, the disparities in diabetes mortality rates between Israel and other countries may trace to different coding practices. 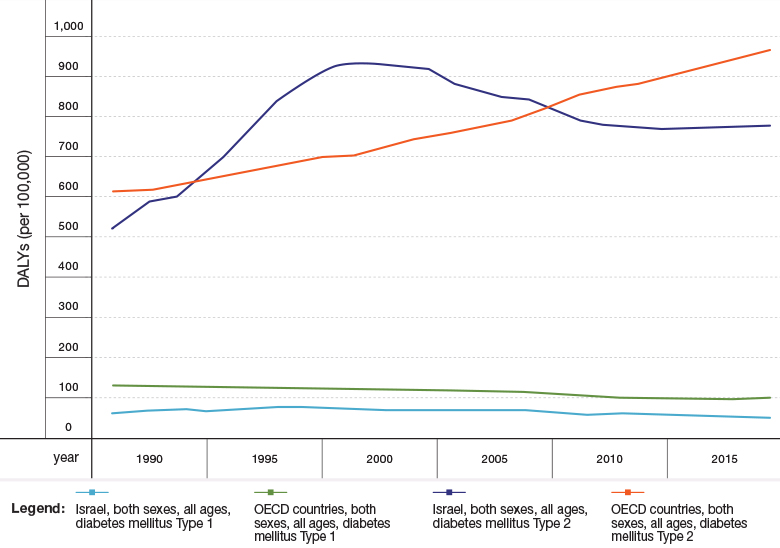 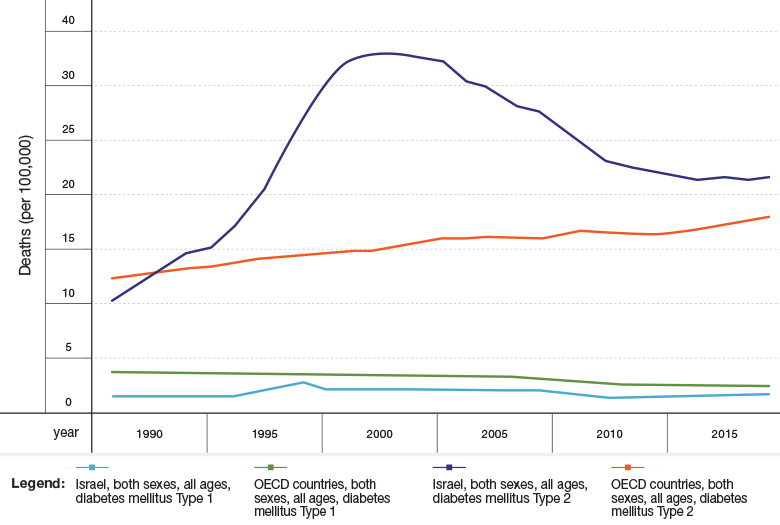 Several studies have found an association between early childhood health indicators, including congenital anomalies and autism spectrum disorder (ASD), and environmental exposures, with emphasis on exposure to air pollution.10, 11

In a report on congenital anomalies in Israel based on data collected in 2000–2014, MoH researchers found a downward trend in the rate of congenital anomalies reported in Israel, from 14.8 per 1,000 live births in the year 2000 to 11.1 per 1,000 live births in 2014. It should be emphasized that many prenatal diagnoses are made in Israel that lead to pregnancy termination, meaning that the decrease may be associated with the termination of pregnancies following the detection of fetal malformations. In the first half of the 2000s, an increase in congenital anomalies was observed. However, the trend reversed in 2006. An increase was seen in rates of malformations of the heart, blood vessels, genital organs, eyes, urinary system, and the abdominal wall, and in the rates of genetic anomalies. The rates of malformations in the nervous system, muscles, skeleton, respiratory system and digestive system, and in the rates of chromosomal anomalies, all showed declines.12

Researchers from MoH, Bar-Ilan University, the University of Haifa, and Ben-Gurion University of the Negev, examining data on more than two million singleton births in 2000–2014 and tracking trends in birth outcomes during that period, identified an upward trend in newborn weight and a downward trend in the birth of underweight newborns.13

Researchers from the Hebrew University of Jerusalem, the National Insurance Institute (NII)and Harvard University, using NII data to study the prevalence of ASD in children, found a prevalence of 0.64% in eight-year-olds. An increase in prevalence among children born before 2009 leveled off afterwards. The researchers found that ASD incidence was higher in higher-income families.14

Environmental factors such as climate change as well as infrastructure problems in water systems may increase the risk of vector-borne diseases.

Rapid urbanization and an increase in population density in Israel are leading to accelerated construction, growing traffic congestion, and destruction of green spaces—all posing risks to health. Therefore, it is important to establish environmental health indicators such as distance of homes from green spaces and main traffic arteries, exposure to noise, and the amount of time Israel residents spend on the roads. Adding cognitive indicators such as trends in ASD and in Attention Deficit Hyperactivity Disorder (ADHD) would also be useful.

Most environmental health indicators are based on analyses of direct health databases (birth, hospitalization, morbidity, and mortality data). But it is also possible to learn about environmental health trends on the basis of indirect databases that include data on physician visits, medication use, or social media traffic. Accordingly, additional indicators based on indirect databases should be formulated.

In Israel, causes of death are recorded by the Central Bureau of Statistics. These records, however, like those in other countries, are not sensitive enough to monitor mortality caused by environmental exposure or climate change. Monitoring causal associations with mortality is challenging because environmental exposures generally cause morbidity, which, in turn, may increase mortality risk; in addition there is frequently a lag between the environmental exposure and the increase in mortality. Even in cases of extreme air pollution and extreme heat, it is challenging to monitor associations between environmental exposures and mortality. Only the direct cause of death is recorded—with the exception of very extreme events, such as the significant upturn in mortality that was occasioned by exceptionally low temperatures in the winter of 1992. Therefore, epidemiological research is needed to cross-check exposure data with mortality data in a way that would accurately reflect the association between these two variables.