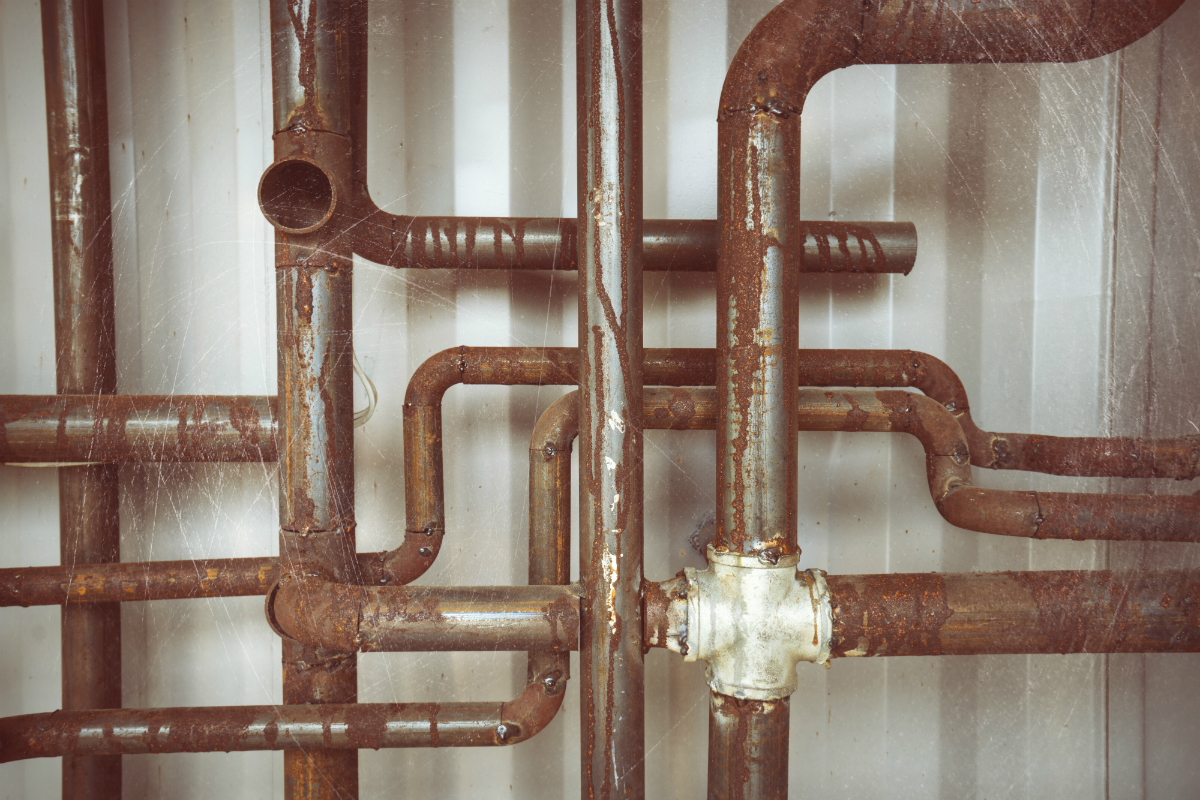 Israel’s drinking water is unique in that there is a high proportion of desalinated water in the distribution system (over 50%). Desalinated water has been used to supplement severely limited natural sources and to help cope with consecutive drought years. The distribution system includes water from different sources (desalinated, surface, and groundwater), and the mix can fluctuate hourly and monthly. This operational flexibility and the use of a range of drinking water sources allow for a reliable supply system. There is significant geographic variability in the water supply, including in the proportion of desalinated water in the supply system.

The chemical quality of drinking water in Israel is regulated according to standards originally promulgated in 1974 and updated in 2013. The 2013 standards include maximum contaminant levels for over 90 chemical contaminants, including metals, pesticides, radionuclides, and industrial organic pollutants. Drinking water suppliers are required to conduct periodic testing for these contaminants in drinking water sources and to report the results to the Ministry of Health (MoH). Table 1 shows maximum permitted concentrations and potential health effects of selected contaminants highlighted in this chapter. 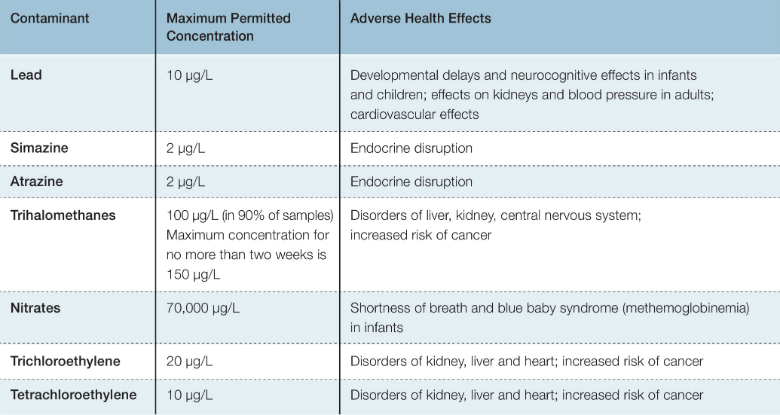 The quality of bottled water, like other food products, is under the supervision of the National Food Service at the MoH. Standards set in 1986 define the maximum permissible concentrations of chemicals in the sources of bottled water.

Israel’s drinking water standards require large water suppliers that desalinate seawater to stabilize the water before it is supplied to the public. The required stabilization values include pH level of 7.5-8.3, dissolved calcium level of 80-120 mg/L as CaCO3, alkalinity of above 80 mg/L as CaCO3, Calcium Carbonate Precipitation Potential (CCPP) of 3-10 mg/L as CaCO3, and a positive Langelier Saturation Index. Desalination plants established prior to 2009 are required to stabilize water according to a positive Langelier Index—without requirements regarding CCPP. In 2016, the MoH published less stringent requirements regarding levels of CaCO3 (less than 3 mg/L).

Data on Chemical Parameters in Drinking Water in Israel 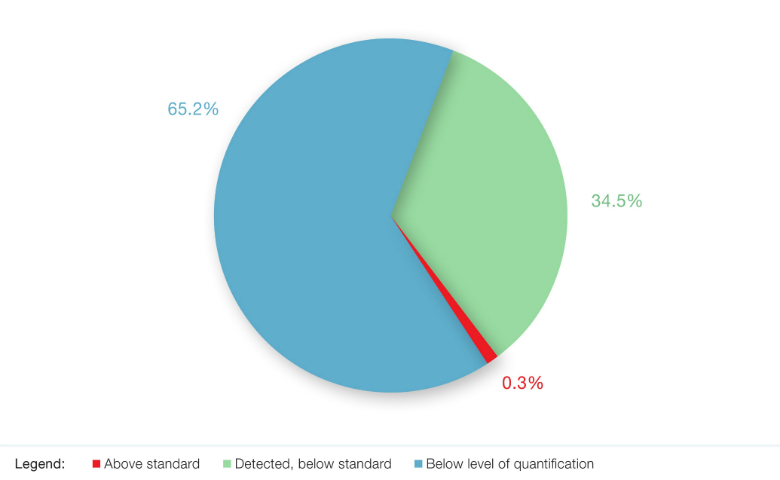 In 2015, there were sporadic exceedances in THM levels in communities in northern Israel receiving drinking water from the National Water Carrier. THM levels decreased significantly in 2016 following changes in the disinfectant and supply systems, the dilution of surface water with groundwater or desalinated water, and the aeration of water reservoirs.

Figure 2: Percentage of Desalinated Water out of the Total Drinking Water for Residential and Industrial Uses, 2005-2015
Source: Israel Water Authority 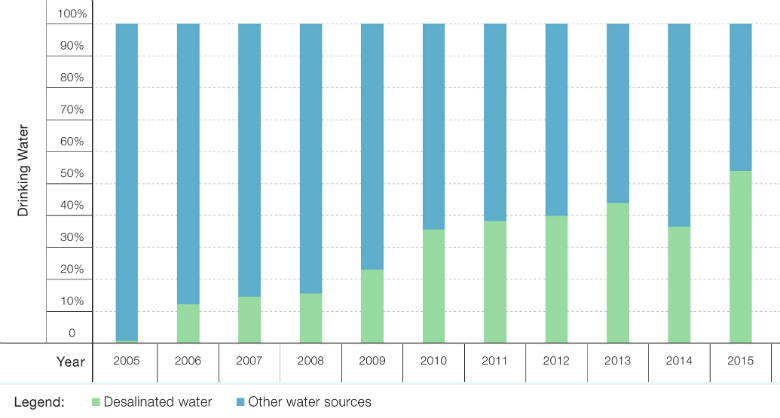 Geographical differences in primary drinking water sources in Israel result in geographic variations in mineral content. Monitoring data from 2015-2016 indicate that the magnesium levels in drinking water sources were 150-190 mg/L in the south (Arava), 3-5 mg/L in the north, and 0 (zero) in desalinated water (compared with the recommended level of 20-30 mg/L). Iodine levels also vary considerably, ranging from 0 (zero) in desalinated water to 250 μg/L in the south (Arava) (Table 2). However, these values do not reflect the magnesium and iodine levels in the water supply system. For example, the general population in the Arava receives desalinated drinking water and not groundwater(1).

Research on Adverse Health Effects and Drinking Water in Israel

In the Environmental Health in Israel 2014 report, the major challenges concerning chemical parameters in drinking water included understanding the potential impact of desalination on mineral intake and public health, understanding the impact of discontinuing fluoridation, and limiting the lead content of materials that come into contact with drinking water. Additional challenges were related to the presence of pesticides in drinking water sources and the lack of a central database of drinking water contaminants that are not included in the standards (such as unregulated chlorination byproducts and pharmaceuticals).

While progress has been made in researching the impact of magnesium and iodine deficiencies due to the consumption of desalinated water, the findings on these adverse health effects have not been translated into policy. A government feasibility study on adding magnesium to desalinated water, mandated by the 2013 drinking water standards, has yet to be completed. The MoH, the Ministry of Agriculture and Rural Development (MoAg), the Water Authority, and the Ministry of Finance are planning a pilot study to examine the feasibility of adding magnesium to drinking water; the study will seek to identify the best technology and estimate the required budget. To date, there is no plan to supplement desalinated water with iodine due to the potential harm of high iodine intake. In light of new findings of the prevalence of iodine insufficiency among children and pregnant women, the MoH published recommendations to add iodine to table salt and to salt used in bread.

There has been significant progress in limiting the lead content of products that come into contact with drinking water (new requirements will enter into force for non-metal products in 2018 and for metal products in 2019). There has also been significant progress in creating a central database of chemicals in drinking water, including unregulated chemicals such as carbamazepine. There is a lack of data on the presence of other unregulated chemicals - for example, per- and polyfluoroalkyl substances (PFASs).

Drinking water fluoridation was discontinued in 2014 and the impact on dental health is unclear, especially among low socioeconomic groups.

Dramatic fluctuations in drinking water sources can lead to consumer complaints about the water’s taste. The MoH published recommendations stating that fluctuations should be gradual and accompanied by testing for the presence of heavy metals, but the implementation of these recommendations remains a challenge.

Since heavy metal testing of tap water is not conducted routinely in residences or institutions in Israel, it is unknown whether the increasing amounts of desalinated water in distribution systems have caused leaching of lead and other heavy metals into tap water. In the last MoH survey on the presence of lead in tap water, conducted in 2011, lead was detected in 10% of the samples. The MoH is planning the fourth survey on lead in tap water in residences and institutions, including schools.

While there is abundant data on chemical parameters of drinking water sources and drinking water in the municipal supply system, there is insufficient data about the chemical quality of tap water. Mekorot, the national drinking water supplier, is planning to develop a model for assessing and managing the water mix at central mixing junctions and at points of consumption. This will help the MoH and researchers evaluate the mineral content - for example, iodine and magnesium - in drinking water.

The MoH aims to reinstate drinking water fluoridation in 2017, after having discontinued it for three years. Since the standards require that fluoride levels not exceed 0.7 mg/L, this will require precise monitoring of fluoride in the distribution system.

Israel is becoming increasingly reliant on desalinated water as its primary source of drinking water. In recent years, the Water Authority began planning an additional desalination plant in northern Israel to supply desalinated water to the Galilee region. There is a need for further research on the impact of desalination on the intake of magnesium, iodine, fluoride and other minerals, and the potential impact of decreased mineral intakes on public health. As the percentage of the population consuming desalinated drinking water continues to grow, there is an increasing need for ongoing discourse among policymakers on ways to minimize the potential public health risks associated with desalination and low mineral intake.