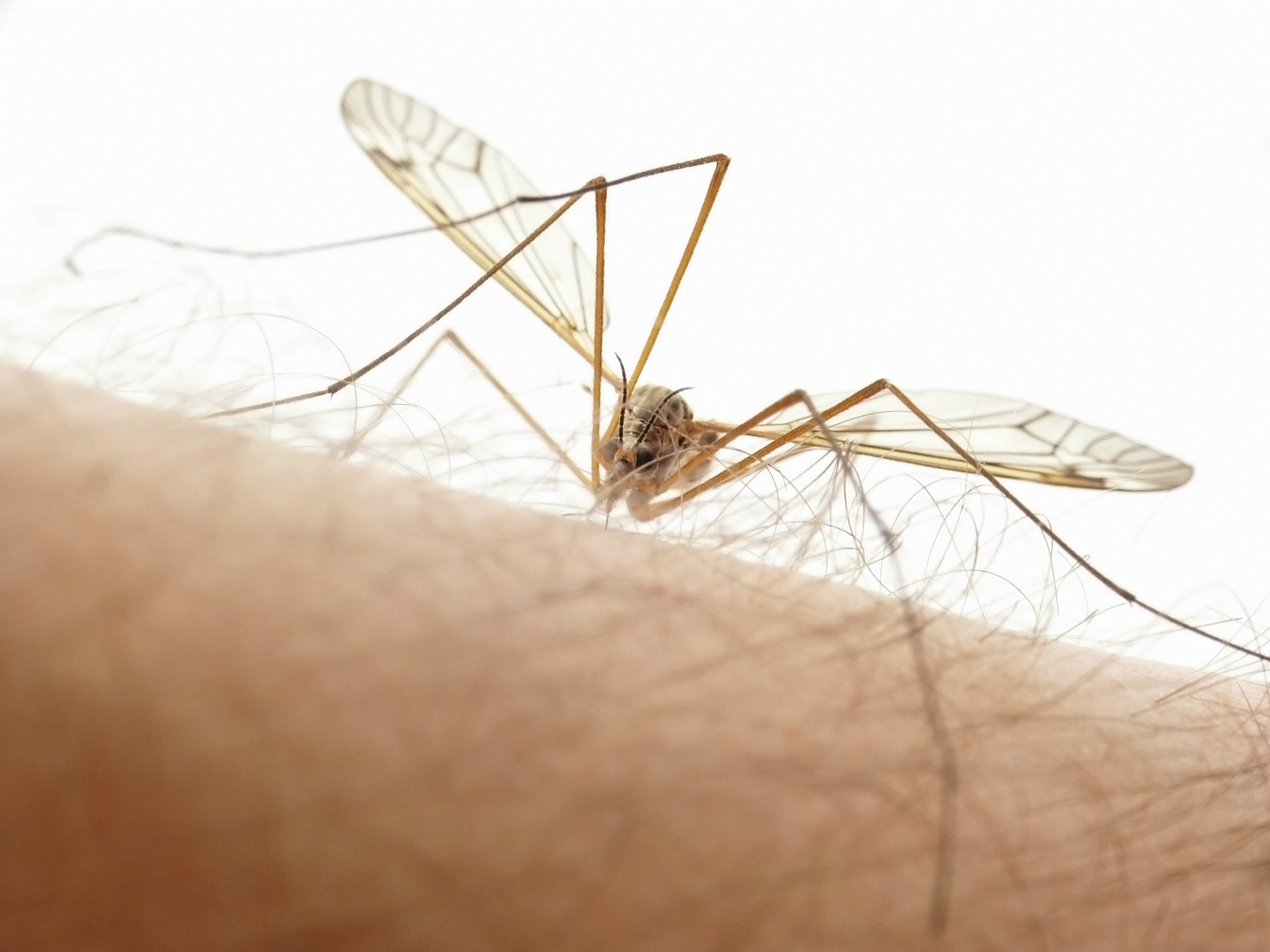 Climate change poses serious threats to public health. Extreme heat contributes to deaths from cardiovascular and respiratory disease, and an increase in the number of extremely hot days can lead to an increase in preterm births. High temperatures raise the levels of ozone and other pollutants in the air, which exacerbate cardiovascular and respiratory disease, including asthma in children. Increased frequency of dust storms may increase the risk of related respiratory illnesses and loss of work/school days. Extreme weather events and natural disasters, such as floods, can lead to an increased risk of water-borne diseases. High temperatures can be detrimental to sanitation and increase the risk of food spoilage due to the proliferation of bacteria or mold. Finally, climate change is expected to impact the incidence of vector borne diseases (for example, West Nile Fever, malaria, and cutaneous leishmaniasis), as well as pesticide use for pest control. According to 2014 estimates by the World Health Organization (WHO) on global morbidity and mortality due to climate change, 38,000 elderly people will die from heat exposure in 2030; another 48,000 deaths will result from gastrointestinal diseases following consumption of food or water contaminated by bacteria or mold; malaria will cause 60,000 deaths; and childhood undernutrition will cause an additional 95,000 deaths(16).

Prior to the Paris Climate Change Conference in 2015, Israel declared its goal of an unconditional economy-wide target of reducing per capita greenhouse gas emissions by 26%, from the levels measured in 2005. This translates to specific policy targets in various sectors in the economy, to be achieved by 2030: a 17% reduction in electricity consumption; the generation of 17% of consumed electricity from renewable energy sources; and a 20% reduction in transportation emissions. In 2016, the Israeli government approved a national plan to mitigate greenhouse gas emissions and to increase energy efficiency.

The National Adaptation Plan for climate change, which includes specific action plans for various government ministries, was initiated following a binding government resolution in 2009. The plan, which awaits government approval, identifies knowledge gaps regarding climate change in Israel and proposes a wide-ranging research plan to close these gaps. Furthermore, following a government-wide consultation process, the plan reviews the impact of climate change and extreme weather events on various sectors in the economy, and suggests sectoral action plans, including the development and implementation of tools and technologies for coping with climate change(8).

In 2015, the Ministry of Environmental Protection (MoEP) held a national conference on climate change. Representatives from 12 government ministries, academic institutions, nongovernmental organizations, the Israel Meteorological Service (IMS), and the Hydrological Service participated in the event, which focused on plans and strategies for climate change adaptation(9).

The Ministry of Health’s (MoH) preparations for climate change have focused on short-term responses to extreme climatic events (e.g., heat waves, cold waves, and floods). This includes a plan to upgrade the preparation of hospitals and medical systems as part of the emergency system. The MoH published an infographic on climate change, which includes recommendations for coping with extreme heat waves, with an emphasis on the elderly(12). The MoH publishes warnings to the public on upcoming heat waves and extreme cold events, with recommendations for the general public and vulnerable populations, including the elderly and individuals with chronic disease. However, there is still a need for long-term preparations for climate change, including promoting research (with a focus on the implications for public health), improving the accessibility of relevant information to the public, and collection of clinical data, such as incidence and prevalence of climate-change related diseases.

Data on Climate Change and its Health Effects in Israel

Figure 1: Ratio between Minimum, Average, and Maximum Temperatures measured in Israel from 1951-2016 and the Average Values measured in the 1970s
Source: Israel Meteorological Service(3) 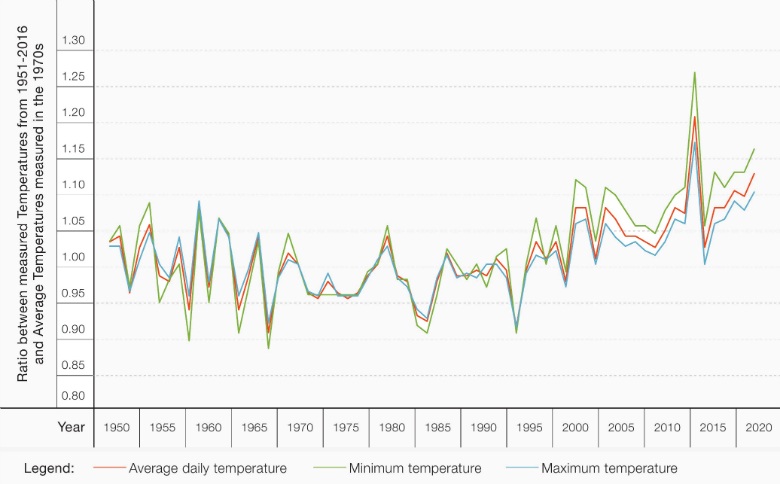 The winters of 2013/2014 and 2015/2016 were the driest on record in northern Israel. In recent years, there were several extreme weather events in which dry months were followed by strong easterly winds, causing a dramatic decrease in humidity. Such events create climate conditions that increase the likelihood of wide-scale wildfires, as happened in the winters of 2010 and 2016(4).

Research in Israel on the Health Effects of Climate Change

A study published in 2016 by researchers from the Hebrew University of Jerusalem showed that climate change and global warming may increase the risk of herbicide-resistant weeds due to enhanced detoxification. The researchers examined the response of different weeds to herbicides under different temperatures and found that high temperature causes evolutionary changes in the metabolism of weeds, and these changes increase their metabolic resistance to herbicides. Increased resistance to herbicides may affect human health through crop decreases that could drive up the price of fruits and vegetables and thus affect nutrition, and by increasing the amount of pesticides, which would result in higher public exposure to pesticide residues(14).

A joint study published in 2015 by researchers from the University of Haifa and the MoEP investigated how different Mediterranean countries were preparing for climate change, in particular through adaptation and preparations to cope with vector-borne diseases, which have proved to be influenced by climate change. The researchers focused on six representative Mediterranean countries (Israel, Egypt, Turkey, Malta, Italy, and Spain) and found that all six countries have begun to prepare for this threat. However, policy implementation in these countries is still limited and basic. The researchers also pointed out that cross-border cooperation, which is crucial for coping with this challenge, is not stable and depends on international frameworks(15).

Preliminary results from an ongoing study at Ben-Gurion University in collaboration with the MoH indicate that meteorological factors are responsible for the geographic variation in morbidity caused by Campylobacter bacteria.

In the Environmental Health in Israel 2014 report, the major challenges related to climate change included developing a national action plan to cope with climate change. Other challenges included implementing a national plan to combat cutaneous leishmaniasis, strengthening collaboration between the IMS and the MoH, and creating a nationwide database on the health implications of climate change. While significant progress has been made in developing a national strategy for coping with climate change (recommendations are expected to be submitted to the government at the end of 2017), and significant progress was achieved in implementing the national plan to combat cutaneous leishmaniasis(10), on other topics, there has been little or no progress. The MoH, in collaboration with cutaneous leishmania experts and the Israel Society of Dermatology and Venereology, issued a position paper in February 2016 with the aim of raising awareness about the disease and its diagnosis, and of standardizing the treatment of diagnosed patients(2).

Creating a nationwide database on the health implications of climate change remains a major challenge. Data on heat-related morbidity and mortality is required, as well as an analysis of the incidence of asthma and allergies, and other diseases related to climate change. An assessment of national adaptation to climate change is needed, in particular on the public health impact of factors such as desertification, fires and flooding, and increased reliance on desalinated drinking water. As precipitation continues to decrease and natural drinking water sources continue to dry out, there will be increasing reliance on desalinated drinking water, including in northern Israel. The adverse impact on public health of decreased magnesium, fluoride, and iodide intakes may be indirect effects of climate change.

One of the challenges related to climate change is the lack of specific indicators. In 2015, the MoEP hosted two workshops on Climate Change Adaptation Indicators, including health indicators. The workshops focused on approaches and experiences of climate adaptation monitoring in several European countries(6,7).

Long-term adaptation to climate change remains a challenge that requires political support, inter-ministerial collaboration, and considerable resources. Regarding climate change mitigation, Israel declared its target of emissions reduction by 2030, including a 20% reduction in the use of private transportation. This continues the positive trend of increased public transportation use that occurred during 2010-2015(13). However, data from the Central Bureau of Statistics published in 2017 indicates a sharp increase (5.6%) in the number of private cars purchased in Israel in 2016.