Upon joining the Organization for Economic Cooperation and Development (OECD) in 2010, Israel committed to developing a mechanism for chemical registration. As part of that commitment, the Ministry of Environmental Protection (MoEP) recently established a Chemical Registration Department, whose role is to implement international treaties such as the Stockholm, Rotterdam, and Minamata conventions, and to establish a mechanism for chemical registration.

Currently, the Israeli regulatory framework for consumer products is based on non-binding standards and on mandatory product-specific standards (Figure 1). These product-specific standards are adopted and formulated by stakeholder committees coordinated by the Standards Institution of Israel (SII). Up to 12 members participate in each committee, including ten representatives from industry and trade organizations, academia, and consumer groups, plus two representatives from the government or public bodies.

According to the Standards Law, the Ministry of Economy and Industry (MoE) can declare that a standard is mandatory if the standard is required to protect public health, safety, or the environment. If a mandatory standard applies to a product, that product must meet the requirements of the standard in order to be produced, sold, imported, or exported. An Adoption Committee (with representatives from the MoE, the Ministry of Finance, trade and industry organizations, and the public) reviews mandatory standards and makes recommendations pertaining to national deviations from mandatory requirements.

For imported goods, the Free Trade Ordinance lists the products that must meet the standard’s requirements in order to be released by custom inspectors. Even if a standard is mandatory, if it is not included in the Free Trade Ordinance, the product may be imported based on the manufacturer’s declaration rather than being tested in Israel prior to being released for local use or sale. 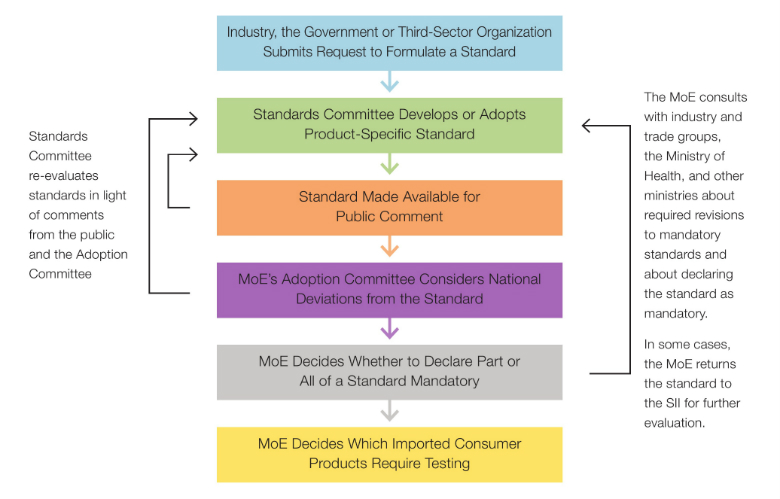 Table 1: Standards for Consumer Products for Infants and Children, Including Requirements to Test for Chemical Contaminants, as of October 2017 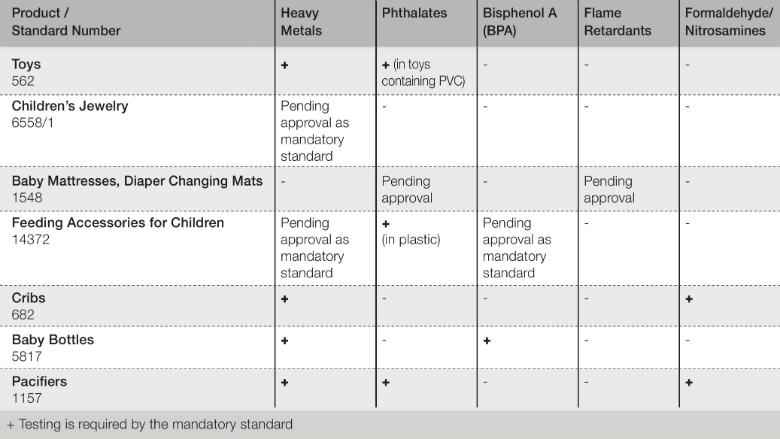 Israeli Standard 5113 is a mandatory standard that requires chemical testing of total migration, BPA, and formaldehyde in plastic materials, products, and components that are in contact with food or beverages. In 2016, the standard was adapted to include both the United States Food and Drug Administration (FDA) and European Union (EU) regulations. A specific migration test was added to the requirements for overall migration. These changes are pending approval by the MoE.

Israeli Standard 900 addresses the safety of household electrical appliances, including electric kettles and coffee machines. According to Standard 900, electrical appliances in contact with water must meet the requirements of Israeli Standard 5452 for concentrations of heavy metals that could leach from the product into the water. This standard is mandatory, but no testing is required under the Free Trade Ordinance.

Israeli Standard 562, Part 3 (Safety of Toys: Migration of Certain Chemical Elements) is a mandatory standard that includes requirements to test heavy metals and phthalates in toys. The standard was updated in 2015 according to the last version of the EU standard. Maximum levels (MLs) of 11 metal elements were added to the MLs already set for 8 metal elements in the previous version of the Israeli standard. A national deviation limiting the ML of phthalates was added to this standard because phthalate content is regulated under other legislation in the European regulatory system.

The mandatory standards for adult mattresses, infant mattresses, and carpets require flammability resistance. Until 2016, the flame resistance requirement included both the open flame test (“the match test”) and the concealed flame test (“the cigarette test”). The requirement in Israeli Standard 5418 (Fire Resistance of Mattresses) to meet the open flame test was canceled to allow for the marketing of mattresses and carpets that do not contain chemical flame retardants. In addition, labeling requirements to indicate whether the product contains flame-retardant chemicals were added(2). Changes to Israeli Standard 1548 (Mattresses and Head Protectors for Beds and Strollers for Infants and Toddlers) and Israeli Standard 636 (Carpet Textiles) that would permit the marketing of products that do not contain flame retardants are currently awaiting MoE approval.

There are no mandatory limits on lead in paint in Israel, but there are numerous voluntary standards that define maximum levels of lead content in paints. In addition, Israeli Standard 1343 includes a mandatory requirement to label paints with lead content exceeding 0.5%. The SII provides a voluntary “Green Label” for paint products that comply with lead restrictions and other requirements. Major paint companies in Israel declare that they comply with these requirements for residential paints. In addition, since there are mandatory lead restrictions for children’s furniture and toys, paints used for these products must comply with strict lead restrictions. In a study conducted in 2017 by researchers from the University of Haifa, the MoH, and the SII, high concentrations of lead were found in coatings and in painted surfaces in public areas such as playgrounds.

Data on Chemicals in Consumer Products in Israel

The MoE issued a number of public warnings and product recalls in 2015-2017, due to exceedances in chemical testing:

In 2017, the MoH published a public warning on heavy metals in children’s jewelry(1). It is important to note that the MoE did not publish a public warning, because there is no mandatory standard for children’s jewelry in Israel and, therefore, the MoE has no authority over this product. The MoH issued the public warning based on the findings of a study conducted by researchers from the University of Haifa, the MoH, and the SII; the study was designed to assess specific environmental contaminants - including heavy metals, phthalates, BPA, and brominated flame retardants (BFRs) - in consumer products for infants, toddlers, and young children. The study found no exceedances of heavy metals in the toys tested. However, 22% of the parts of children’s jewelry exceeded the United States standard for lead, 19% of the parts exceeded the Unites States standard for cadmium. The highest lead levels measured were above 10,000 ppm (compared to the standard of 100 ppm) and the highest cadmium levels measured were above 500,000 ppm (compared to the standard of 300 ppm) (Figures 2 and 3). The results were compared to the United States standard because there was no Israeli standard for heavy metals in children’s jewelry at the time the study was conducted(4). 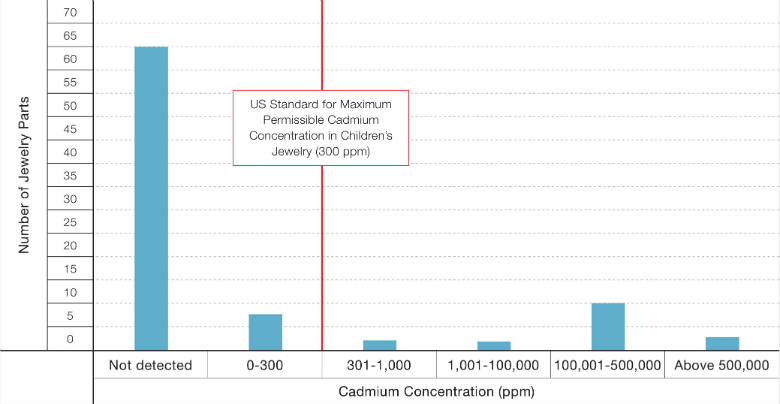 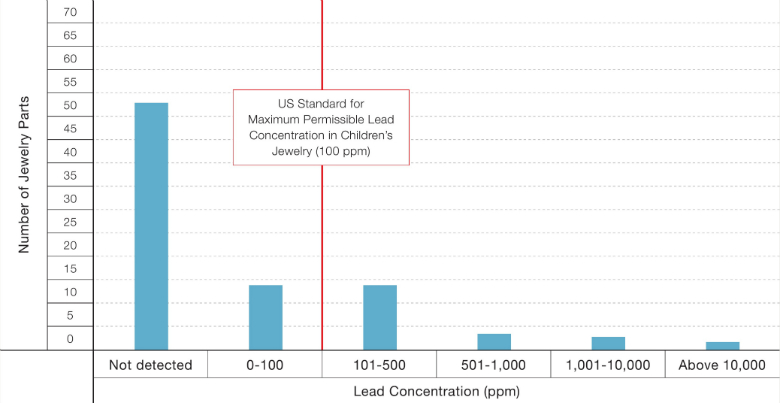 In response to data collected by a private company as part of routine testing of tap water, the MoE checked for lead and other metals in coffee machines. In over 35% of the machines tested, the lead concentration in the water in contact with the machines ranged from 20 to 150 μg/L, compared to the level of 10 μg/L permitted by Israeli Standard 900 (Figure 4).

Some progress has been made in achieving the goals cited in the Environmental Health in Israel 2014 report. There has been progress in collaboration and data sharing among the MoH, the MoE and the SII - in order to promote new standards, to declare standards as mandatory, and to enforce existing mandatory requirements regarding consumer products. However, there is still no formal mechanism to ensure cooperation and the flow of information among the authorities.

The discovery in 2016 of very high lead and cadmium levels in children’s jewelry on the market in Israel highlighted a regulatory gap that could potentially threaten public health. This stemmed from Israel’s standards system, in which United States and EU product-specific standards are adopted without adopting comprehensive legislation in parallel. Following this discovery, the SII adopted a standard for children's jewelry, but until the standard is declared as mandatory, unregulated products continue to be imported and sold in Israel.

The discovery of high lead content in industrial coffee machines also highlighted regulatory gaps. While the requirements pertaining to coffee machines are mandatory, the Free Trade Ordinance does not require testing for lead or other chemicals in these products. Instead, importers are required to declare that the products meet the standard. According to the Free Trade Ordinance, only specific products require testing in order to be released by custom inspectors (e.g., toys), whereas others require a declaration only (e.g., coffee machines, drinking water dispensers). The Free Trade Ordinance requires chemical testing for imported products, but not for products made in Israel. Israeli-made products such as FCMs are tested sporadically in the market. There is a need for market inspections to discover noncompliant products.

An important challenge is to ensure that standards protect public health, despite political pressure and government decisions to reduce trade barriers and increase competition in the consumer product market. According to recent changes to the Standards Law (2017), Israeli standards can deviate from international standards, but these national deviations must be well justified and approved by the Adoption Committee, which does not include a representative from the MoH. The Standards Law explicitly states that the MoE cannot declare a standard as mandatory if it includes a national deviation, unless the declaration is approved directly by the Prime Minister and the Minister of Finance. In certain cases, the MoH has requested national deviations from standards to ensure that they protect public health. For example, in the absence of national requirements regarding heavy metals in paint, the MoH recommended adding requirements to test paints and coatings used in playgrounds for heavy metals. In light of the very strict criteria for establishing national deviations from international standards, and because of the need for approval by the Prime Minister and Finance Minister, there is likely to be increasing political pressure to adopt international standards as they are, even in the absence of comprehensive legislation in Israel pertaining to chemicals in consumer products.

An ordinance from the 1980s granted the MoH authority to regulate chemicals in consumer products, but the MoH has focused its efforts on submitting recommendations and requests to the MoE based on concern for public health. In the case of the standard for children’s eating utensils (Israel Standard 14372), the MoE has yet to declare it mandatory, despite a formal request by the MoH in 2015. The lengthy bureaucratic process of declaring standards as mandatory is a major barrier to reducing potential risks from chemicals in consumer products. Since the updated Standards Law places more emphasis on reducing trade barriers than on protecting public health, there is a need to re-evaluate the role of the MoH in guaranteeing the adoption and implementation of standards that protect public health.