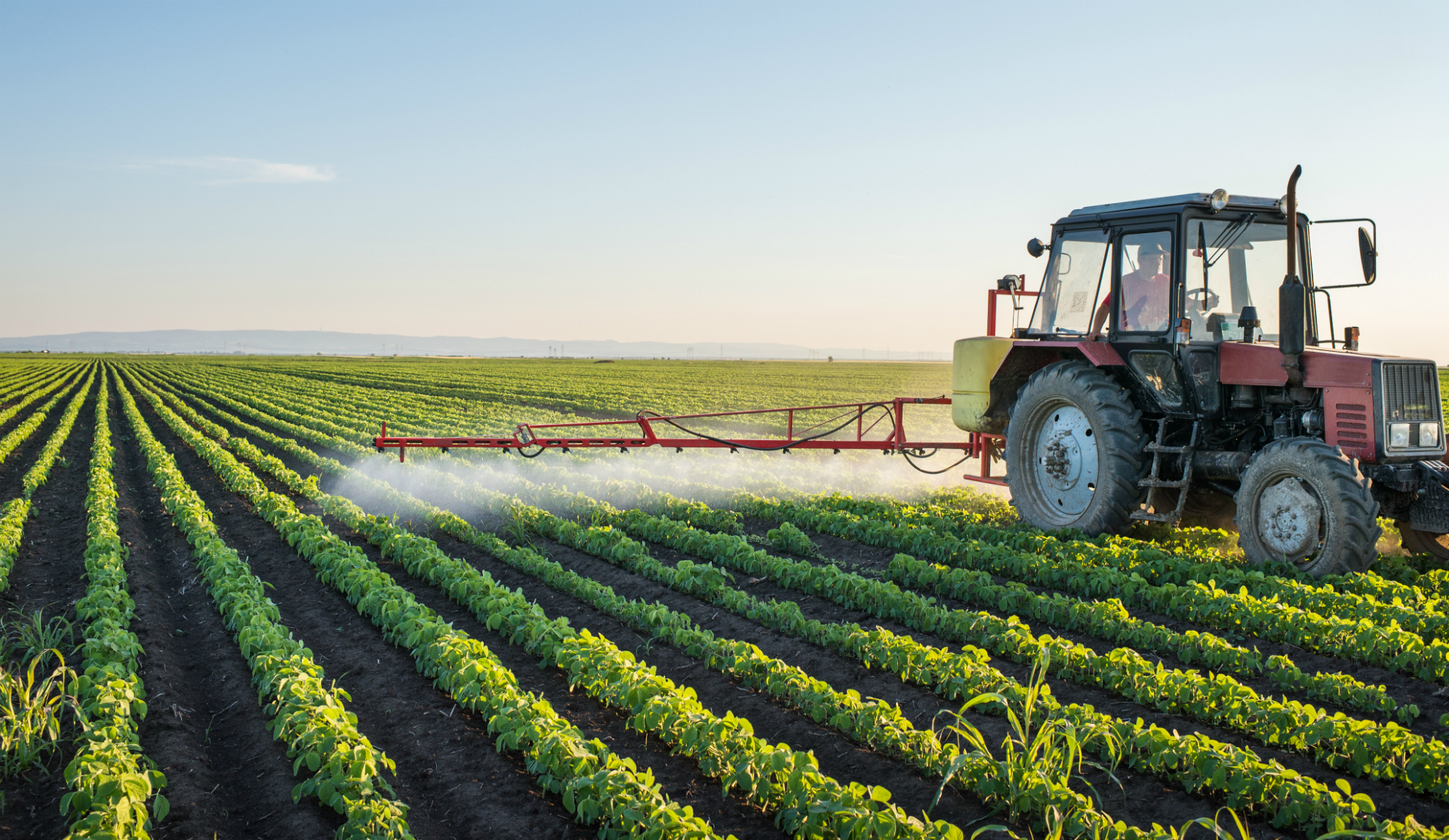 Pesticides are substances or mixtures of substances that are meant to prevent, destroy, repel, or mitigate pests. They include products for use in agricultural plant protection and in rural and urban environments to control weeds and protect humans from pests and vector-borne diseases.

Acute exposure to high doses of certain pesticides, whether occupational or by accidental poisoning, can cause severe adverse health effects including neurological impacts and even death. Even chronic low-dose exposure to pesticides has been associated with neurological, respiratory, reproductive, and endocrine effects as well as cancer. Toxicological and epidemiological studies indicate that fetuses, infants, and children are especially vulnerable to the adverse effects of pesticides.

Four government authorities are responsible for registering pesticides in Israel:

The authorities responsible for registering pesticide formulations also share responsibility for monitoring their use. MoAg and MoH monitor pesticide residues in food—MoAg in local produce at the farm level, MoH in products on the market as well as food imports.4 MoEP oversees the use of pesticides for sanitation; MoAg oversees their veterinary and plant protection use. Since MoAg is the authority that registers herbicides, commonly known as weed killers, it also bears responsibility for overseeing herbicide use outside of agricultural areas, e.g., in cities.

The environmental NGO Adam Teva V’din (the Israel Union for Environmental Defense) is advocating legislation that would require the government to prepare a national plan for reducing the use of pesticides. In the absence of regular Knesset committee hearings in 2019 (due to the political impasse), however, the initiative did not move forward. Even without a national plan, MoAg is promoting initiatives to reduce pesticide use—for example, a project targeting the Mediterranean fruit fly that includes non-chemical pest control.4

The Environmental Health in Israel 2017 report defined challenges related to Pesticides. Progress achieved in this area during the past three years is outlined below.

In 2017–2019, MoAg and the inter-ministerial advisory committee on pesticide formulations for plant protection re-evaluated forty-six active ingredients that are registered in Israel but not in Europe.5 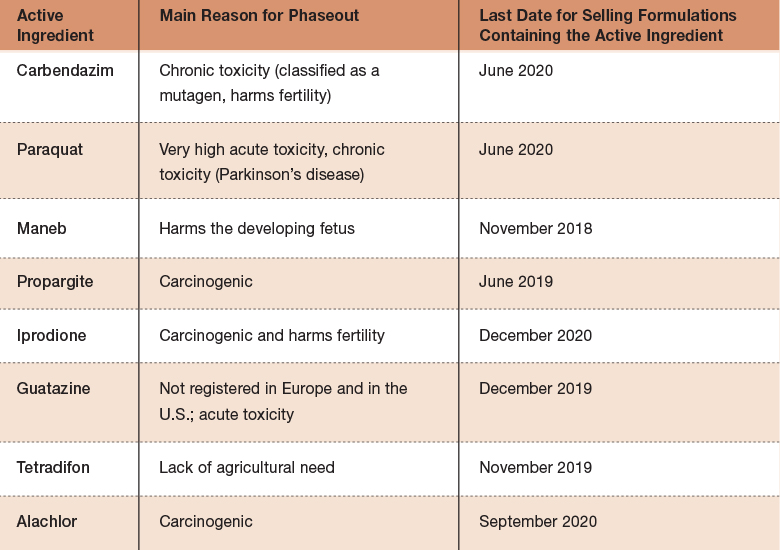 In recent years, data have been published on the Israeli public’s exposure to OP pesticides.

Researchers from the Hebrew University-Hadassah Braun School of Public Health and Community Medicine, collected urine samples from 273 pregnant women and from 107 newborns in 2012–2016, and measured OP metabolites. Researchers found a ~35% decrease in the concentration of total OP metabolites in the samples from both population groups during the period studied. No decrease was observed in the concentration of diethyl phosphate (DEP) metabolites.7 Similar findings were reported in an MoH study, part of the 2015–2016 National Health and Nutrition Survey (Rav-MABAT), that measured concentrations of urinary OP metabolites in 200 adults and 103 children. The researchers found a statistically significant decrease in urinary OP metabolites among adults compared with 2011 (Figure 1).8 As in the findings on OP pesticides among pregnant women and newborns, no decrease in the concentration of DEP metabolites was observed. The OP decrease was apparently the result of restrictions imposed on the agricultural use of certain OPs in 2012–2014. The quantity of OPs sold for agricultural use in Israel dropped from an average of 164 tons/year in 2008–2010 to 103 tons/year in 2012–2016.3 However, the fact that there was no decrease in concentrations of DEP metabolites raises concerns that the use of certain active ingredients such as chlorpyrifos and dimethoate did not decline.

Biomonitoring results in recent years in Israel indicate an association between fruit consumption and OP exposure. Among pregnant women who reported eating fruit in the twenty-four hours preceding urine collection, the concentration of a specific chlorpyrifos metabolite (TCPy) was twice as high as in women who did not report eating fruit before urine collection (3.0 μg/L versus 1.5 μg/L).9 Among children, concentrations of OP metabolites were higher in those who consumed large quantities of fruit than in those who consumed smaller quantities.10

As part of the National Biomonitoring Program, an additional survey to monitor public exposure to OP and pyrethroid pesticides began in 2020.

Figure 1: Concentrations of Total Non-Specific Organophosphate Metabolites in Urine in Adults in Israel, 2015 vs. 2011
Source: Israel Ministry of Health8 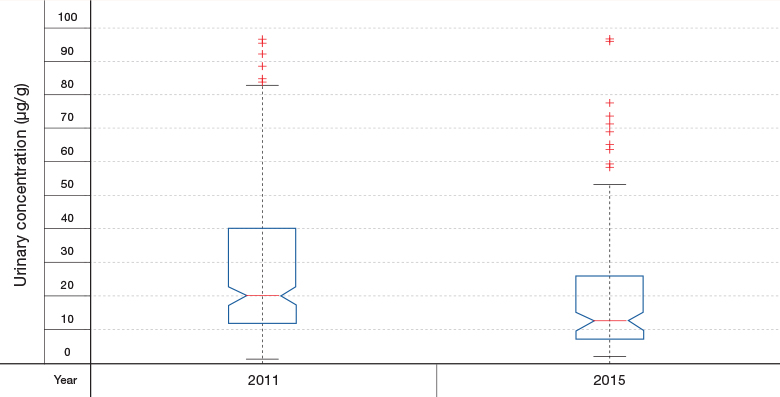 Based on dietary data from the 2015–2016 Rav-MABAT survey, MoH assessed the risks associated with children’s exposure to pesticides and found that children’s exposure to chlorpyrifos and dimethoate pesticides exceeded the health reference values (Acceptable Daily Intake—ADI) set by the European Food Safety Authority (EFSA). The results of the risk assessment were presented to MoAg and appeared in an MoH position paper on chlorpyrifos.

Importantly, the aforementioned exposure assessment was partly based on the results of pesticide residue monitoring of fresh farm produce marketed in Israel. In its monitoring of markets, MoH found exceedances in 12.7% of approximately 2,000 samples taken in 2017–2018 and detected no pesticide residues in 36.7% of the samples.11 A multi-year comparison (2013–2018) shows that in the years 2017–2018, there was a relative increase in the percentage of exceedances, along with a decrease in the percentage of samples in which no pesticide residues were found (Figure 2).

According to a MoAg report, exceedances were found in 11% of the samples tested for pesticide residues in 2017; half of them were not considered exceedances when compared with standards in EU countries.12 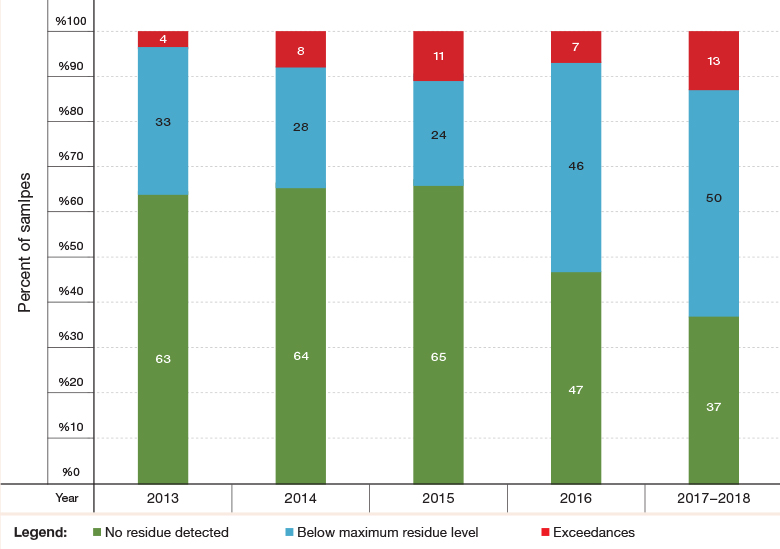 There is no systematic collection of data on all cases of pesticide poisoning in Israel. However, the Israel Poison Information Center at the Rambam Health Care Campus collects and publishes data on inquiries from the public and from physicians. Importantly, the Center’s data do not distinguish between cases of poisoning from agricultural pesticides and those from sanitation pesticides.

Under the proposed Safety Regulations at Work (Occupational Hygiene and Workers’ Health in Pesticides), 2018, only specially trained professionals may apply or purchase pesticides except those labeled for use by the public. In the absence of regular Knesset committee hearings in 2019, however, these measures were not approved. Legislation proposed by the Israel Union for Environmental Defense, titled “Public Health Protection Law: Reducing Pesticide Risk,” addresses the need to train workers who handle particularly dangerous pesticides. The bill, submitted to the Knesset in late 2017, was also stalled due to the Knesset’s paralysis.

A study initiated by the Regional Councils Center at Emek Hefer measured air concentrations of pesticides near three localities in Emek Hefer: Kibbutz Ma’abarot, the Bat Hefer community settlement, and Elyakhin Local Council. The researchers, examining the adsorption of pesticides on filters, found higher air concentrations of two pesticides, pendimethalin and spirotetramat, for about eight hours after spraying than before spraying. Twenty-four hours after spraying, the concentrations of these substances in the air decreased but remained higher than the level detected during spraying.14

In August 2017, MoEP issued professional guidelines for pest control in and around schools.15 The guidelines prohibit pesticide and herbicide use when children are present. Pesticide application in a school is permitted only after approval of the responsible official in the local government and in coordination with the principal of the school. However, there are no available data on the extent of implementation of the new guidelines by schools and local authorities.

The Israel Union for Environmental Defense is advocating a reform that would help to standardize registration requirements and working methods for all active ingredients and pesticide formulations and would require revision every few years based on clear criteria—for example, the level of risk posed by the pesticide.

Research on Exposure to Pesticides in Israel

In December 2019, the EU banned the use of the OP pesticide chlorpyrifos for plant protection. While Israel has narrowed the list of crops for which chlorpyrifos may be applied, it still permits use of this pesticide, mainly in orchards and vineyards, and residue exceedances are still found in agricultural produce. Given the toxicological characteristics of chlorpyrifos, the inter-ministerial advisory committee on pesticide formulations for plant protection recommended canceling the registration of chlorpyrifos formulations in Israel. MoAg should consider banning the use of this pesticide altogether.

The results of various analyses—monitoring pesticide residues in food, biomonitoring urinary OPs in children, and assessing OP exposure based on children’s diet—indicate the need to tighten oversight of pesticide use in Israel and to adopt enforcement measures. There is also a need to expand information outreach in order to reduce the use of pesticides and public exposure to them. To bring this about, all relevant entities, particularly MoH and MoAg, must cooperate.

Several active ingredients that are especially toxic and at the same time very effective, including paraquat and carbendazim, are slated for phaseout in the coming years. Therefore, economic and regulatory incentives are needed to develop substitutes. MoAg favors the accelerated registration of less toxic or substitute formulations that have already been registered in developed countries (primarily Europe and the U.S.). This would also entail adopting international regulation on maximum permissible residue levels. MoAg also supports the gradual phaseout of critical uses of formulations in order to avoid direct and immediate harm to certain agricultural sectors.

According to the Public Health Regulations (Food) (Pesticide Residues), 1991, food imported to Israel must meet the Israeli standard or the Codex Alimentarius (the international standard for pesticide residues). Thus, food may enter Israel even if it was treated with a pesticide that is banned for use pursuant to a risk assessment by the inter-ministerial committee (for example, certain OPs). A regulatory solution is needed to address this issue.

A regulatory framework is needed for prohibiting the sale of especially toxic pesticides to the public and restricting their use. Both the Ministry of Labor and Social Affairs and the Israel Union for Environmental Defense have proposed regulatory solutions that have not advanced due to the political impasse in 2019.

As part of its re-evaluation of the OP chlorpyrifos, MoH presented data from biomonitoring studies and a risk assessment based on children’s diet. The challenge in the coming years is to expand the use of these tools to additional groups of pesticides, including pyrethroids and neonicotinoids, and to additional groups of vulnerable populations including women of childbearing age.

(14) Nekudat Hen (in press). Monitoring pesticides in the air as a basis for agreement in the agricultural-community interface (Hebrew).